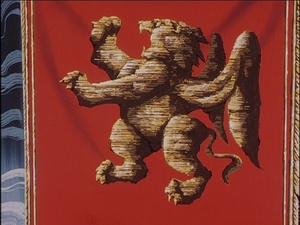 Flag of the New Galactic Empire and Lohengramm Dynasty

Prior to the conquest of the Free Planets Alliance, Reinhard moved the Imperial Capital to Fezzan. After the fall of the Free Planets Alliance, Fezzan served as the centre of power for the Goldenlöwe Dynasty. It was hinted to be eventually transformed into a strong constitutional monarchy by Kaiserin Hildegard von Lohengramm and her son, Alexander Siegfried von Lohengramm. Julian Mintz, being the representative of Iserlohn Republic which upheld democratic ideals, would presumably play an important role in reshaping Imperial politics.