Siegfried Kircheis (Japanese: ジークフリード・キルヒアイス) was an Imperial high admiral who was most notable for his role as the best friend and personal confidant of Reinhard von Lohengramm since childhood, who later became his top admiral. Often referred to as Reinhard's "shadow," Lohengramm viewed Kircheis as a part of himself. Kircheis was frequently present with Reinhard throughout their military career while rising through the ranks of the Imperial Fleet, following him from assignment to assignment, before reaching the admiral ranks himself in 796 UC (487 IC / 3596 CE). Although some regarded him as being the blond admiral's "henchman," Kircheis demonstrated himself to be a highly competent admiral in his own right during the Castrop Rebellion and the Free Planets Alliance's attempted invasion of the Empire.

However his favored position as Reinhard's favorite ended up causing animus between him and another subordinate of the blond admiral, Paul von Oberstein, whose underhanded methods Kircheis disapproved of. This did not last long as Kircheis would die at the conclusion of the Imperial Civil War in September 797 UC (488 IC / 3597 CE).

Siegfried Kircheis was an only child of middle class parents and lived in a quiet neighborhood when the von Müsel family moved in next door. Kircheis immediately befriended the young Reinhard von Müsel and his sister Annerose von Müsel. Almost immediately Kircheis fell in love with Annerose, and he too was devastated upon learning of her "purchase" by the Kaiser. Soon after, he swore an oath to Reinhard that he would help him any way he could on his path towards gaining the necessary power to free his sister, a level of power exceeding the Kaiser's. By doing this they agreed to commit treason in their future to forcefully free Annerose. Soon after Kircheis entered the Imperial Academy to train to be an officer at the request of Reinhard who was choosing the military as his career path because it was the fastest way to gain power within the Empire if you were a commoner or low noble.

Alliance Invasion of the Empire

After the massive Alliance invasion fleet entered the Empire, Kircheis's fleet began to attack the Alliance supply fleet, resulting in the Alliance being forced to stall its invasion and forage for its supplies. This resulted in numerous revolts against Alliance forces by Imperial citizens who were worried about starvation. Just as the lack of supplies was taking full effect on the Alliance forces, Imperial Fleet Admiral Reinhard von Lohengramm ordered all forces under his command to launch and simultaneously attack each separate Alliance fleet, preventing any one fleet from going to support another. Responding to these orders Kircheis's fleet cornered the Alliance's 7th Fleet and forced it to surrender in its entirety. Out of the 8 numbered fleets the Alliance launched, the largest armada in its history, only the 5th Fleet, 8th Fleet, and 13th Fleet remained battle worthy. Fleet Admiral Lobos ordered his remaining forces to make a stand in the Amritsar System, against the advice of Admiral Greenhill who advocated total Alliance withdrawal back to Iserlohn Fortress. Knowing they would be outnumbered, the Alliance forces deployed a massive minefield to their rear to prevent being outflanked by the now larger Imperial fleets. After narrowly avoiding defeat at the hands of Reinhard's main force, the Alliance's 5th and 13th fleets, now the only capable Alliance forces left intact, were taken by surprise when Kircheis ordered the new directional seffle particle generators to be deployed tp clear a path through the Alliance mines. Once a path was cleared, all hope for the Alliance forces faded and Admirals Bewcock and Yang organized their fleet's withdrawal and avoided it turning into a route. This was the first time that directional seffle particles had been revealed to the Alliance, even though a prototype had almost made it into the hands of the Alliance years earlier and that same, albeit malfunctioning prototype had been used against them by Reinhard and Kircheis as they escaped after retrieving it. Kircheis was promoted to High Admiral soon after.

During the Imperial Civil war, Reinhard von Lohengramm sent Kircheis to the Empire's frontier worlds to quell the various small uprisings and revolts that were occuring thanks to the collapse of Goldenbaum authority. This particular part of the campaign came to a decisive battle between Kircheis's fleet of 40,000 ships versus the 50,000 ships of Marquis Littenheim. Taking advantage of the Littenheim fleet's lack of cohesion, Kircheis's flagship, the Barbarossa, personally led a detachment of only 800 ships that cut directly through Littenheim's formations, resulting in chaos and the quick route of Littenheim's fleet. Shortly after Littenheim escaped by blasting his way through his own supply ships, he was killed by his own disgruntled subordinates in Garmisch Fortress. Kircheis seized this opportunity and took the fortress with minimal blood spilled. After this, all sizable Lippstadt presence in the frontier systems was eliminated, thus completing his mission given from Reinhard.

Shortly after finishing his duties in the frontier, Kircheis became aware of certain rumours surrounding Reinhard's possible involvement in the Westerland Massacre, and traveled to Geiersburg Fortress to meet with his newly victorious superior and friend. After confronting Reinhard he learned that Reinhard was indeed using the massacre as a political tool, even though he had only indirectly allowed it to happen because of misleading intelligence supplied by Oberstein. After a somewhat heated exchange in which Kircheis insisted that calculating and sacrificing lives for the greater good was never acceptable, Reinhard asserted his authority over him, which resulted in Kercheis leaving the issue alone for the time being, thinking that because Reinhard was still the intelligent good hearted person he originally befriended, he would eventually understand his point of view. Unfortunately for Siegfried, he would not live to see this revelation occur in Reinhard.

Reinhard's chief admirals were all in attendance when the former officers of the Lippstadt League came before Reinhard. Immediately after Vice Admiral Adalbert von Fahrenheit was pardoned and permitted to join the ranks of Reinhard's admirals, Commodore Ansbach, the chief retainer of the recently deceased Duke Otho von Braunschweig, approached Reinhard with Braunschweig's body, seemingly to present it as a gift. Upon stopping in front of Reinhard, Ansbach pulled out a rocket launcher he had hidden in a cavity in the body's chest and swore to kill Reinhard. Oberstein jumped in front of Reinhard to block the rocket with his own body, however, this was not what saved Reinhard. Just as the rocket fired, Kircheis had lunged at Ansbach, knocking him off his aim just enough to narrowly miss both Reinhard and Oberstein. Upon the rocket missing its target, Ansbach brandished a particle beam firing ring and shot Kircheis once through the chest. Kircheis, unfazed by the first shot continued to wrestle Ansbach to the ground. From his back Ansbach fired once more, striking Kircheis in the neck, mortally wounding him. Even so, Kircheis's grip was so strong on Ansbach's ring bearing forearm that as the other admirals wrenched Ansbach away Kircheis broke Ansbach's arm. As Vice Admirals Wahlen, Bittenfeld and Kempf restrained Ansbach, Admiral Wolfgang Mittermeyer attempted to aid High Admiral Kircheis. After Ansbach expresses how killing Kircheis was still an agreeable result, he chews a cyanide capsule and dies. Reinhard descends to talk with Kirchies, expressing how he still hopes that Kircheis can survive even though it is obvious he will not. Kircheis tells Reinhard to tell his sister Annerose that he had kept his promise from long ago and has Reinhard make him one last promise, to conquer the universe, before Siegfried Kircheis dies from his wounds sending Reinhard into a deep depression.

Siegfried Kircheis was posthumously promoted to Imperial Fleet Admiral, and was buried on Odin, with the words "Mein Freund" inscribed upon his tombstone. Although he died fairly early in the history around the transition from the old to new empires, he was still mentioned and admired by many of those that remained critical players in the future. This was especially true in the cases of Reuenthal, Mittermeyer, and Hildegard von Mariendorf who all often reflected on how much easier a situation would have been if Kircheis were still alive and around to consult Reinhard, who himself was also constantly thinking of Kircheis and what he would have done with regards to the problems they were now facing. Even Yang Wen-li regretted Kircheis's early demise, going so far as to personally believe that if he were still alive, peaceful coexistence between the Empire and Alliance would be much easier to achieve.

Kircheis appeared to have his left carotid artery hit by Ansbach. The brightness of the blood argues against it being the jugular veins because those would bleed out dark venous blood. If the carotid were hit, Kircheis should have lost blood and consciousness very rapidly, before he could have finished his last words with Reinhard. 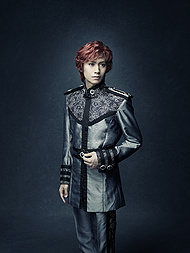 Kircheis is played by Hiromi Sakimoto in the 2011 stage adaptation of LOGH.