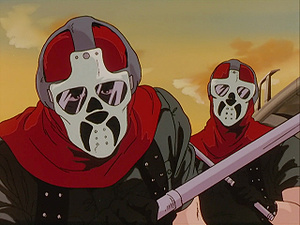 The Patriotic Knight Corps (Japanese: 憂国騎士団) were an ultranationalist terrorist organization that operating during the waning years of the Free Planets Alliance, under the command of politician Job Trunicht. The PKC functioned as a death squad, enforcing the ideologies of the pro-war politicians amongst the populace by 'punishing' anyone who dared to dissent. The Patriotic Knight Corps were involved in murder, extortion, bribery, and arson. Because of the political figures backing the PKC, neither the civilian nor military police forces could do much to deal with the PKC — and rarely tried.

Following the defeat of the Free Planets Alliance, the PKC was held responsible for the great fire on Heinessen that occurred in 800 UC (2 NIC / 491 IC / 3600 CE), and many of its members were either arrested or killed by the Imperial Military Police. (LOGH: 'Eve of the Festival')