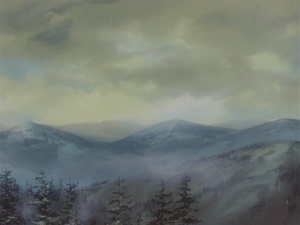 The Freuden Berge (Japanese: フロイデン山地) is a mountainous zone located west of the former Imperial capital on the planet Odin. It could be traversed in six hours by landcar. Three chains of mountains met at a single point and the landscape was marked with deep ravines and chains of lakes from the tectonic forces that had produced those mountains. The area was known for its natural beauty. As a result, several villas had been constructed there. Many of those villas were abandoned by the nobility that owned them in the wake of the Lippstadt War.

It was in this area that Annerose von Grunewald chose to settle after leaving Neue Sanssouci. She had selected a villa which sat on a peninsula which extended into a lake. The property was marked by an oak gate and fence at the base of the peninsula. The path from the gate to the fence was of substantial length and passed through hazelnut groves before culminating in a meadow. The villa itself was in part tended to by Konrad von Modell who had been taken in by Annerose. It featured a dining room, a salon, and at least four bedrooms. (LOGH: 'Farewell, Distant Memories')

When the Fezzan backed plot to abduct Erwin Josef II was uncovered, Hildegard von Mariendorf went to visit and convince Annerose of the need for greater security. This need was recognized and left at Mariendorf's discretion, though Konrad von Moder extracted a promise that the guards would never set foot inside the villa and would not compromise his duties to the Countess in any way. (LOGH: 'Thunder')