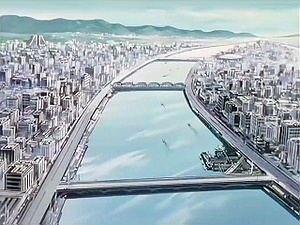 Heinessenpolis (Japanese: ハイネセンポリス) was the largest city of the planet Heinessen, and the capital of the Free Planets Alliance from 527 UC (218 IC / 3327 CE). In 800 UC (2 NIC / 491 IC / 3600 CE), following the Galactic Empire's victory in the Alliance–Imperial War and the subsequent dissolution of the Alliance, it became the capital of the Imperial Neue Land.

﻿Heinessenpolis was founded in the very early days of the Alliance's existence by the displaced Imperial citizens who had made landfall on Heinessen and created the nation. It first served as their main camp, and later as their main industrial hub as the fast-growing Alliance population claimed the planet for themselves. It became the central administrative city of the growing stellar, and then interstellar, nation.

Before or during the war with the Empire, Heinessenpolis, with its massive Strategical Planning Centre and adjacent military shuttle transportation hub, also became the Alliance's central military administrative hub and marshalling grounds.

By the end phase of the war, Heinessenpolis was a vast, highly industrialised metropolis with a population numbering in the millions.

The nearby military spaceport provides a point of reinforcement and evacuation of the populace as has been done in 799 UC (1 NIC / 490 IC / 3599 CE). (LOGH: 'The Battle of Vermilion (Part One)')

The city was built at the confluence of two rivers. The central piece of land between the rivers was the commercial and business district. The governmental district and buildings were situated on the east bank, while residential districts were on the west bank. As a second line of defence, there were ground to orbit missile emplacements in armoured towers and also as pop-up turrets. (DVD Features)