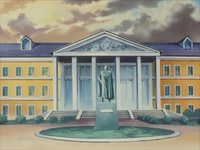 The Odin Imperial Officer Academy (Japanese: ) was the primary officer commissioning school for the Galactic Empire's armed forces. Located on the Imperial capital of Odin, the Academy produced many notable graduates, including Reinhard von Lohengramm, Siegfried Kircheis, and Wolfgang Mittermeyer.

Around 793 UC (484 IC / 3593 CE), the academy was involved in an incident that was investigated by the Imperial Military Police, beginning as the death of a cadet named Karl von Reifeisen, and ultimately several others, including Johann Gottholp von Bertz. It was revealed in an investigation that the Academy principal, Gerhard von Steger had found that Reifeisen was killed accidentally and tried to make it look like a murder to not be charged with negligence, then murdered Bertz to assist his grandson and to implicate Moritz von Haase as the killer. The truth was discovered by Reinhard von Lohengramm, who was a captain at the time. (DMSN: )