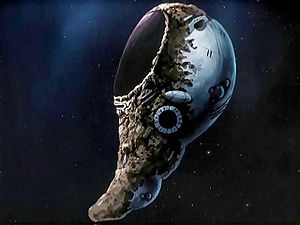 Rentenberg Fortress (Japanese: レンテンベルク要塞) was a fusion-powered Imperial fortress. During the Imperial Civil War, it was initially occupied by the Lippstadt League, but it ultimately fell to forces commanded by Marquis Reinhard von Lohengramm.

Rentenberg was partly built on and into an irregular roughly kidney-shaped asteroid. Although it had a dome-like metallic area on one side, there was no indication of a main gun on the same scale as the Vulture's Claw and the Thor Hammer of the Geiersburg and Iserlohn fortresses respectively. Internally, the fortress consisted of numerous passageways tunneled into the asteroid interspersed with a few larger chambers.

The fortress had banks of beam turrets in retractable mountings. Due to the irregular shape of the asteroid, there were blind spots in the coverage that were exploited by Admirals Mittermeyer and Reuenthal to reach service passageways that led to the main fusion reactor powering the whole fortress. (LOGH: 'Bloodshed in Space')

Rentenberg is a common German surname found mainly in the northern area of Germany. It means pensions pay mountain.[clean-up needed]