(Redirected from Treaty of Ba'alat)
Jump to: navigation, search 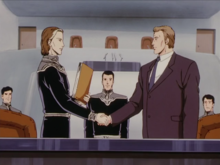 2. The Alliance cedes to the Empire the Gandharva Starzone and two other starzones located near the exits of the Iserlohn Corrider and Fezzan Corridor.

3. The Alliance recognizes the free navigation of Imperial warships and civilian ships within the territory of the Alliance.

4. The Alliance pays the Empire a security tax of 1.5 trillion Imperial Marks per year.

5. The Alliance retains armaments as a symbol of sovereignty, but relinquishes the right to own battleships and space carriers. In addition, when the Alliance constructs and remodels military facilities, it should consult with the Imperial government in advance.

6. The Alliance should enact domestic laws to prohibit activities aimed at undermining friendship and cooperation with the Empire.

Ba‘alat is the feminine form of the North-West Semitic title and honorific Baal, which was used to denote various ancient Levantine and Asia Minor goddesses, most notably Ba`alat Gebal, or 'Lady of Byblos'.