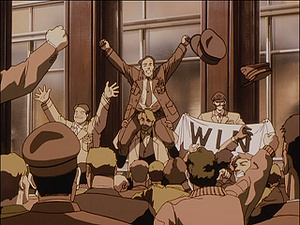 In 2690 CE various United Earth Government Space Force soldiers were tried by a military tribunal for war crimes committed during the occupation of Rondolina, at the start of the Earth–Sirius War.

Space Force troops occupying Rondolina's capital had intentionally manipulated casualty estimates in order to embezzle the salaries of deceased soldiers, engaged in the torture and murder of civilians, and looted massive amounts of property from the citizens of Rondolina. Over 600,000 civilians were killed in the occupation.

Though their atrocities were covered up, an unnamed UEG journalist (a war correspondent) discovered the crimes, and exposed them. The military tribunal ultimately exonorated the accused UEG soldiers, and branded the journalist who had attempted to bring them to justice as an unprofessional lout, who had falsified the evidence in order to advance his career. The unnamed journalist was later sued by the United Earth Government for libel. (LOGH: 'To Earth')