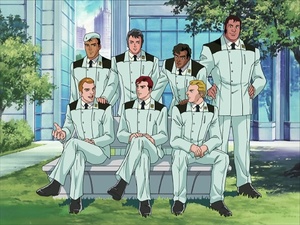 The Year 730 Mafia (Japanese: 730年マフィア) was the name given to a small, close-knit group of officers in the Free Planets Alliance military who came to dominate both the political and social spotlight for several years during the Alliance–Imperial War. This name was given them over the fact that the entire group graduated in 730 UC (421 IC / 3530 CE). Centered around the famed tactician Bruce Ashbey, the members of the Year 730 Mafia became celebrities, and their victories on the battlefield would serve as an inspiration for the following generation of soldiers.

The Mafia's individual histories are generally unknown, aside from the fact that they were all, except Ashbey himself, born in 710 UC (401 IC / 3510 CE) (Ashbey was likely born in the late months of the previous year), and that each of them entered the Free Planets Alliance Officer Academy in Terneuzen in 726 UC (417 IC / 3526 CE). There, each of them proved to be a talented student, and by their graduation in 730 UC (421 IC / 3530 CE), each of them were in the top 20 students, with Ashbey, Warwick, Fang and Rosas being in the top 5. During their Academy years, the seven young men became close friends, and started working together to further their careers. (SL: 'A Profile of Heroes')

It is unknown what these men did between 730 UC (421 IC / 3530 CE) and 738 UC (429 IC / 3538 CE), except for a few facts. First of all, the group was already being de facto led by Ashbey, who was the most charismatic, outspoken, and arguably the most talented of the group. Secondly, they tended to follow one another from assignment to assignment, earning many promotions. By the end of those eight years, Ashbey had attained the rank of Captain, while the others had all gained the rank of Commander.

In 738 UC (429 IC / 3538 CE), the 730 Mafia, by then fast-rising but minor Alliance commanders, were crucial in bringing the Alliance forces a complete tactical victory at the Battle of Firezard, earning themselves an immediate promotion and the adoration of the Alliance citizens. According to Yang Wen-li, their stunning achievements and talents had also acquired them another fan - ex-admiral Martin Otto von Siegmeister. A defector from the Empire, Seigmeister was an idealistic believer in republican ideals who had since become disenchanted with the imperfect and sometimes hypocritical nature of the Alliance. In them, or so Yang hypothesized, the ageing ex-imperial saw his last chance to bring about the changes he wanted to see.

Whatever the case, the next seven years saw the sharp rise of the Mafia. Commodore Ashbey quickly rose in rank to Rear Admiral, and then to Vice Admiral and command of one of the numbered fleets in 742 UC (433 IC / 3542 CE), the youngest Alliance officer to ever reach that rank at that point in time. The other members also rose, always one rank below Ashbey. It appeared that Ashbey tended to take much of the credit for the stunning array of victories that the group managed to achieve, keeping himself always ahead of his friends. This annoyed several of them, most importantly Warwick, who had always been seen as 'second-best'. This slight resentment, however, didn't break the bonds between the members, although it did strain them.

It was during this time that Ashbey proposed a strategic plan in which a large fortress would be built on the Alliance side of Iserlohn Corridor, greatly hampering Imperial invasions and at the same time strengthening Alliance defenses. At the same time, another project, more tactically-minded, was on the table about enlarging the Star Fleet. With each project being very costly, only one of them could be implemented at the time. Although Rosas years later implied that the fortress idea was arguably the better one in the long run, Ashbey himself was a tactician and not a strategist, and the appeal of leading a larger fleet was enough that he withdrew his fortress project. (SL: 'A Short Trip to the Past')

By 745 UC (436 IC / 3545 CE), all of the 730 Mafia had achieved greatness, with Ashbey being Commander of the Space Fleet, Rosas as the Space Fleet Chief of Staff, and the others each commanding one of the Alliance's numbered fleets. As a group, they thus could call upon roughly half of the Alliance's space forces, and were arguably in control of the Star Fleet's overall strategic direction by the 740s.

Members of the Year 730 Mafia

The strong ties between members of the Year 730 Mafia began to unravel shortly before the Second Battle of Tiamat, due in large part to the growing egoism of their leader, Bruce Ashbey. Following the death of Bruce Ashbey during the Alliance's resounding victory at the Second Battle of Tiamat, the Year 730 Mafia disbanded. (SL: 'Between the Mourning Dress and Military Uniform')