A cruiser (Japanese: 巡洋艦) is a type of vessel that bridges the gap between smaller destroyers, which serve as escorts for other ships, and larger battleships, which provide the main firepower of a fleet. Cruisers serve in a variety of supporting roles, including for escorting, reconnaissance, patrolling, and sometimes supply transport. 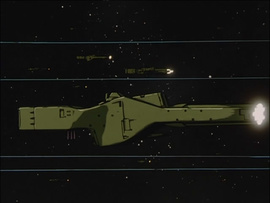 Port view of an Alliance cruiser

The cruiser was the workhorse of the Free Planets Star Fleet and the most numerous warship class operating under the Alliance flag. (Data Book: Mechanic & Seiyū Encyclopaedia, p. 138, 179, 180)

It used in a wide variety of roles — fire support, escort duty, border patrol, advance scouting, and even for the transport of weapons, medicine or supplies. Though somewhat lacking in size and firepower, Alliance cruisers were small and tough and well suited for small-scale engagements. (LOGH: 'The Battle of Vermilion (Part One)', RET: 'Chapter III')

Many of its functions are automated, allowing it to be serviced by less crewmen. (LOGH: 'The Crimson Star Road') 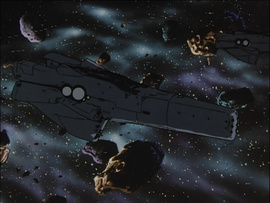 The starboard view of an Imperial cruiser

In the Reichsflotte cruisers served in a variety of supporting roles to other vessels, and also were known to have been used for patrol duty. In a small fleet commanded by a rear admiral, as many as a quarter of its ships were typically cruisers. (LOGH: 'First Battle', RET: 'Chapter I')

It was designed to be a balance of firepower, endurance, and mobility. (Data Book: Mechanic & Seiyū Encyclopaedia, p. 170)