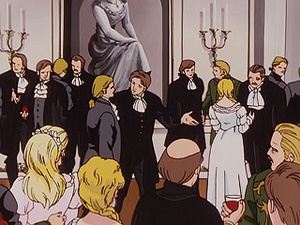 An aristocratic social class founded by Rudolf von Goldenbaum in 9 IC (318 UC / 3118 CE) to serve the Galactic Empire, the nobility held most of the political and economic power in the Empire during the rule of the Goldenbaum Dynasty.

Ironically, when Rudolf von Goldenbaum first established the aristocracy, it was something of a meritocracy: men and women of exceptional ability could, at times, be elevated to noble rank. This provided early Imperial society with a degree of upward social mobility, allowing the culture of the Empire to stay dynamic. Eventually, however, the nobility became a stagnant social class, which could only be inherited through blood. This gradually increased the resentment of the lower classes, and eventually led to the Exodus of Arle Heinnesen, and a rise in republican protestors and social reformers. The High Nobility, however, was ruthless in destroying anything that might endanger its authority.

In the Imperial Civil War, most of the High Nobility sided with Duke Otho von Braunschweig. At the end of the civil war, Reinhard von Lohengramm abolished the privileges of the aristocracy, stripping the nobles who rebelled their titles, positions and property.

Nobility in name only, low nobles were poor aristocratic families of limited economic means. They did not necessarily own land grants, or hold positions of power within the government. These lower-class nobles were considered something of an embarrassment by the high nobles.

Reinhard von Lohengramm was born into the von Müsel family, which had the lowest rank of nobility just one step above commoner status, Imperial Knight.

Ostensibly drawn from both the high and low nobility, reformer nobles were aristocrats who advocated the democratic reform of the Empire and some, possibly, the abolition of the aristocratic class and the position of Emperor. During the Imperial Civil War, the reformer nobles were persuaded to side with Reinhard von Lohengramm by Hildegarde von Mariendorf, the head of the Mariendorf family. Eventually, all of the high and lower nobles that sided with the Lohengramm administration kept their aristocratic titles and properties, some even participating in the new Imperial cabinet or as members of the New Imperial Court.

After Reinhard seized power, most reformer nobles expressed praise for Reinhard's reforms, while others expressed concern over his unwillingness to abolish the Goldenbaum Monarchy. Among those were Karl Braque and Eugen Richter, two former nobles that gave up their titles to serve Reinhard in a reformed government.

The known noble ranks in the Empire are (in descending order):

The rank of Imperial Knight had previously been sold by the Imperial family when in need of funds, but by the time of Friedrich IV, this means of fund raising was not possible as the title was no longer valuable. (Legend of Galactic Heroes Gaiden Volume 1: The Star Crusher: 'Cobweb')