Hildegard von Lohengramm (Japanese: ヒルデガルド・フォン・ローエングラム), née Mariendorf (Japanese: マリーンドルフ) was the lone daughter of Franz von Mariendorf, the head of an old aristocratic family and was instrumental in garnering support for Reinhard von Lohengramm's imperial ambitions from the more liberal members of the lower high nobility — mostly lower nobles. Eventually, she became very close to Reinhard, and the two were married. Upon Reinhard's death, Hildegard as the Kaiserin became the regent for the New Galactic Empire.

Like many noble children, Hildegard led a privileged life and had a generally happy childhood that was perhaps marred only by the early death of her mother. However, unlike most noble ladies of her age, Hildegard was not interested in traditional aristocratic hobbies such as jewels, dresses, horse racing and flowers and was instead interested in political and military sciences. (LOGH: 'After the Ceremony, the Curtain Rises Again...', HBSHBL: 'The Night of the Party')

Upon the death of Kaiser Friedrich IV, Hildegard counseled her father, Count Franz von Mariendorf who at that point intended on supporting Duke Otho von Braunschweig, to instead support the ambitious Reinhard von Lohengramm. Her father consented and Hildegard then arranged a meeting with Reinhard. In exchange for promises that her family's financial holdings would remain intact, Hildegard gave her support to Reinhard. Hildegard than began meeting with reformers — typically members of the lower nobility — to raise support for Reinhard. When the Imperial Civil War broke out, Reinhard, who had taken a liking to Hildegard at their first meeting, hired her as his personal secretary and advisor. Throughout the civil war, Hildegard spent most of her time consolidating Reinhard's political power on Odin and laying the groundwork for the reforms that would begin when Reinhard seized power. (LOGH: 'The Lippstadt Conspiracy')

After the end of the civil war, Reinhard von Lohengramm had the Imperial regent, Klaus von Lichtenlade, arrested, and assumed the title of Prime Minister himself. He refused to declare himself Kaiser yet, retaining the five-year-old Kaiser Erwin Josef II as a puppet. With most of the high-nobles killed in the civil war, Reinhard and Hildegard immediately began reforming the social and political structure of the Empire. Corruption was rooted out, and the populace was given unprecedented liberty.

When Reinhard began making preparations for an invasion of the Free Planets Alliance, Hildegard advised him not to. It was, she believed, more important for him to focus on cementing his rule. Reinhard countered by saying that people needed an enemy to unite. Hildegard agreed, but where Reinhard saw this enemy primarily as the Free Planets Alliance, Hildegard thought the old aristocracy filled that role. Reinhard insisted nonetheless on military action, and set about precipitating the Eighth Battle of Iserlohn which ended in a major Imperial defeat.

Afterwards, Reinhard refrained from further military operations until Erwin Josef II was kidnapped and an Imperial government in exile was set up by nobles attempting to restore the Goldenbaum dynasty. This act drew widespread support for renewed attacks on the Alliance from the public in the Empire as they had been turned thoroughly against the old high nobility by the Westerland Massacre. (LOGH: 'Lost Things', 'The Return', 'The Arrow Is Released')

During this time period, Hildegard served as a proxy for Reinhard's wishes to Annerose von Grunewald. She convinced the countess of the need for greater security. (Legend of Galactic Heroes Volume 4: Stratagem)

In late 798 UC (489 IC / 3598 CE), Reinhard announced to his subordinates his plan to subjugate the Free Planets Alliance. The subsequent expedition, henceforth known as "Operation Ragnarök", was initially very successful and resulted in the annexation of Fezzan, the return of Iserlohn Fortress to Imperial control and the defeat of the Alliance's 1st Fleet, 14th Fleet and 15th Fleet in the Battle of Rantemario by early 799 UC (1 NIC / 490 IC / 3599 CE). However, when Yang Wen-li began to engage the stretched out Imperial expeditionary force in guerilla warfare, Reinhard decided to personally set himself as bait to lure out Yang into open warfare. Reinhard's plan was opposed by Hildegard, who saw no need for Reinhard to assume such a risky move. When Reinhard dismissed her concerns as unnecessary and proceeded with a single fleet to Vermilion Starzone, Hildegard began to think of a contingency plan. (LOGH: 'Fezzan Occupied', 'Admiral Yang's Ark Fleet', 'The Two-Headed Snake: The Battle of Rantemario', 'Battle After Battle')

The contingency plan involved the besieging of the Alliance capital planet of Heinessen to force an unconditional surrender of the Alliance government and make Yang to lay down arms as per the surrender. Among the admirals Reinhard dispatched to secure various sectors of Alliance space as part of the setting up of the bait, Hildegard chose to confide her plan to Wolfgang Mittermeyer and managed to convince him and his best friend and fellow admiral Oskar von Reuenthal to besiege Heinessen instead of joining up with Reinhard in Vermilion Starzone. The resulting siege of Heinessen on 5 May 799 UC (1 NIC / 490 IC / 3599 CE) ended with a faster-than-expected unconditional surrender of the Alliance government which in turn enabled Reinhard, who was on the verge of defeat, to win the Battle of Vermilion when Yang accepted his government's ceasefire orders. (LOGH: 'Sudden Change')

Attending a ceremony at the Imperial Cemetery of the War Dead on Fezzan in 29 August 800 UC (2 NIC / 491 IC / 3600 CE), Reinhard was attacked by an Imperial Fleet soldier. Although the attempt on his life was easily prevented, this did not prevent the would-be assassin from accusing Reinhard of complicity with Braunschweig in the nuclear attack on Westerland three years before. Although false, the accusation devastated Reinhard, who blamed himself for the failure to send a relief force to prevent the atrocity. That evening, after Hildegard attempted to assuage his guilt with reason, Reinhard admitted he did not wish to be alone and asked her to stay with him.

The following morning, Hildegard returned home alone but Reinhard arrived only shortly afterwards and asked her father for permission to marry her. His stated explanation was that he did not wish to follow the example of the 'lecherous' Goldenbaum Kaisers. Count von Mariendorf diplomatically advised that Hildegard was emotionally distraught but did not refuse. Hildegard's own reactions were denial and she declared that Reinhard did not love her and as acting out of obligation. When asked if she loved him, she claimed uncertainty. (LOGH: 'Roses at Summer's End')

During Oskar von Reuenthal's revolt Hildegard discovered that she was pregnant. Although at first she chose to hide this from Reinhard but shortly after Wolfgang Mittermeyer's return from Heinessen she told Reinhard, who renewed his proposal. This time she accepted and they were married early in 801 UC (3 NIC / 492 IC / 3601 CE). (LOGH: 'Rebellion Is a Hero's Privilege', 'Running Start Towards the Future', 'Long Live the Empress! (Hoff Kaiserin)')

Little is known of Hilde von Mariendorf's rule as dowager Kaiserin and regent for her son, history recorded her as the ruler who nurtured Reinhard von Lohengramm's empire out of its infancy. At his deathbed, Lohengramm advised Hildegard in two respects: first, that if his son, Alexander Siegfried von Lohengramm, was unfit to rule, that he should not rule; second, that if she felt it right, Hildegard should go forward with creating a constitution for the throne. 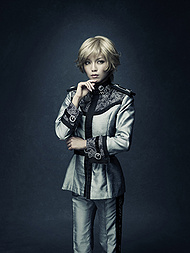 Hilde is played by Misako Uno in the 2011 stage adaptation of LOGH.