(Redirected from Ministry of War)
Jump to: navigation, search

This article is about building on Odin. For its successor on Fezzan, see Ministry of War building (Fezzan). 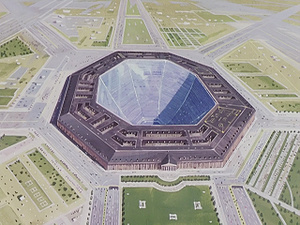 The Ministry of War (Japanese: 帝国軍務省, Imperial Ministry of Military Affairs) building was the seat of the Galactic Empire's war ministry on the planet Odin. During the Goldenbaum Dynasty, it contained the offices of the three military chiefs of staff, Fleet Admirals Ehrenberg, Mückenberger, and Steinhof. (LOGH: 'The Actress Exits')

Following the transfer of the Imperial capital to Fezzan, the war ministry was moved to the hotel Vltava. (LOGH: 'Premonition of a Storm')

During Reinhard von Lohengramm's stay on the planet Heinessen, the military's provisional headquarters was the National Museum of Art in Heinessenpolis. (LOGH: 'Planet of Confusion')

Sketches of the Ministry of War and some of the rooms within it appear in the DVD features.