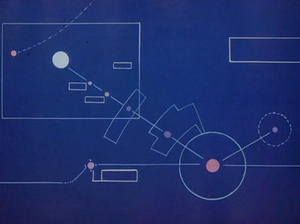 The planet Proserpina (upper left), shown highlighted in a diagram of the Proxima Starzone

Proserpina (Japanese: プロセルピナ) is a habitable planet located in the Orion Arm of the Galaxy, in traditional Imperial territory. The fifth planet of the Proxima Starzone, Proserpina was one of the earliest colony worlds, and played a major role in the Earth–Sirius War of the mid-2600s. (LOGH: 'To Earth')

After Rondolina fell to the Space Force of the United Earth Government in 2689 CE, many members of the Sirius Revolutionary Congress fled to Proserpina, where they helped to organise the Anti-Earth Movement into a force capable of fighting the UEG on equal terms.

In 2691 CE, Carle Palmgren, Winslow Kennes Townshent, Joliot Frankul, and Chao Yuiling all met each other for the first time on Proserpina. There, they quickly became the leaders of the Anti-Earth Movement and founded the Black Fleet. Proserpina would serve as the headquarters for the Black Fleet and the beating heart of the anti-Earth resistance movement until the eventual liberation of Rondolina, some time prior to 2703 CE. (LOGH: 'To Earth')

The name Proserpina is a reference to the ancient Roman goddess of the same name. She is also known as Proserpine, although her Greek equivalent, Persephone, is perhaps more familiar to Western audiences.

As Persephone is the wife of the Greek god Pluto, her name and its variants are frequently used in science fiction to refer to hypothetical trans-Plutonian planets of the Solar system. Amongst the stories which feature such a planet are Mostly Harmless by Douglas Adams, A Life for the Stars by James Blish, and multiple works by both Arthur C. Clarke and Larry Niven.