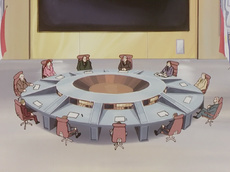 The High Council (Japanese: 最高評議会) was the chief governing body of the Free Planets Alliance. The 11 member council was presided over by a 'Supreme Chairman', who was head of state, with the other positions serving as a cabinet. It was permanently dissolved when the Alliance surrendered to the New Galactic Empire at the end of the Second Alliance–Imperial War.

Each term of office was 4 years. (Legend of Galactic Heroes Volume 1: Dawn)

The positions of most of the other High Council members in the Sanford Administration, but not their names, are given in the DVD features. (DVD Features)