Firstly, this is really looking rad. I've made some changes and wanted to leave notes though:

1. I've changed a few links around, nothing major.

2. I've made a few minor changes to capitalisation/punctuation, and fixed some typos.

3. I've reformatted the infobox a bit to be more complete (the 'flag officer' and 'purpose' sections specifically) — does this look OK, or is it too verbose? It seems OK to me but i want to be sure i'm not missing anything

5. Unrelated to any changes i've made, i dislike the image we have. I know i uploaded it, but i was dumb. :/ Let's find another one

That's cool, no problem with any of those changes, nice work with the Purpose / Flagship section of the infobox. Re the picture, the Hyperion is very hard to find decent pictures of. Most times, its drawn in such a way that you don't get a full appreciation of its contours / lines. I've been looking for candidates, but in every case the ship's sides look too flat, or the ship is too damn far away to make out fine detail. I'll keep searching.Vympel 03:24, 24 May 2011 (UTC)

Oh, one more thing - the Yang Fleet didn't really exist anymore after Vermilion. It was briefly "The Irregulars" before they arrived at El Facil (Hyperion wasn't part of that formation though), then it became the cumbesome "El Facil Revolutionary Reserve Force". Then the Iserlohn Fleet (or something along those lines?) after Yang's death. Should that be put in the infobox as well? Vympel 12:03, 24 May 2011 (UTC)

Tried to fix it up just now, but it looks awful. Names are too long. (it should be Iserlohn Republic Force or whatever first, then El Facil Revolutionary Reserve Force (EFRRF) second, then Yang, then 13th). Dammit. Vympel 11:52, 25 May 2011 (UTC)

I find that's the way Season 4 looks sometimes, dunno why. There's some other shots I have in mind - on the weekend I'll look at sprucing up the article with some images too, so it can be more like Brunhild. Also I'll play with Brunhild a bit if I get time (wanna change the Phezzan pic to something different, less samey-angle looking). Vympel 11:57, 7 July 2011 (UTC) 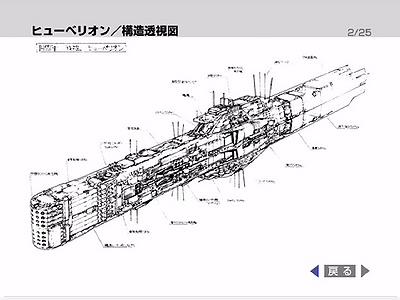 What is the view with regards to use of official sketch material from the Encyclopedia DVD (part of the Japanese DVD box set) which shows some material about various things like mechanical stuff not directly seen in the series? An example is the Hyperion internal detail sketch, which we do not directly see since we do not see the ship with its innards exposed, but which offer some interesting insights such as the length of the beam cannons for example. Other examples on the Encyclopedia DVD include things like the layout of the Perceval bridge, with details that are not directly shown in the series (due to choice of camera angle). Most of the sketches are not actual cels but finalized concept sketches outlining data about the universe and various perspective pictures of characters, ships, and explanations of what certain things are. Incidentally many of the details on this DVD agree with the Fleet File Collections so clearly they were in communication or were working from the same pool of knowledge. Iracundus 11:32, 14 October 2011 (UTC)

Our current policy, one i very strongly support, is that anything that's not explicitly depicted in the anime goes under either Apocrypha or Background information. In this case i would argue for placing a DVD features section (or something to that effect) under Apocrypha and detailing it there  ♥ kine @ 13:53, 14 October 2011 (UTC)