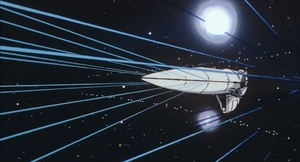 Beam armaments were the primary form of weaponry used in space combat, capable of accurately striking targets against vast distances. Due to the heavy electromagnetic conditions that frequently engulfed battlefields (caused by ECM usage, subspace distortions and natural phenomenae) shipboard cannons were typically operated manually. These cannons would typically be mounted in recessed gunwells, protecting them from enemy fire while simultaneously allowing for wide firing arcs of as much as 45 degrees.

Most warships were were designed to be long and narrow, with the slimmest possible forward-facing profile to minimize the surface area vulnerable to enemy fire. Large arrays of beam cannons would be clustered on this forward-face of the warship in order to maximize the number of beams that could be shot forward at any one time.

Warships often boasted a (usually equivalent) number of laterally-oriented "broadside" cannons as secondary weapons, to be used in the event of extreme close-range combat with enemy vessels, as well as to provide defensive fire in case of being outflanked.

Beam cannons would typically be fired in synchronized volleys. While these volleys were often evenly-spread throughout the target formations, Free Planets Alliance tactician Yang Wen-li favored focusing his fleets' volleys at a single point in the enemy formation in order to maximize their destabilizing affect on energy-dampening shields.

These volleys would often be times to coincide with the impact of fusion missile volleys, launched earlier.

Most warships were designed to present the narrowest possible forward-profile, which minimized the target they presented to the enemy while simultaneously restricting the number of beam cannons that could be fired at once. Warships also boasted many laterally-oriented beam cannons which could be used to defend against flanking attacks and in close-range combat. (Legend of Galactic Heroes Volume 2: Ambition)

Though visually indistinguishable from one another, there were multiple types of beam armament: older vessels typically used electron beam cannons, while newer ships were equipped with the more powerful and efficient neutron beam cannons.

In the past, electron beam cannons were the main form of ship weaponry due to the inability to accelerate electrically neutral neutrons directly using electromagnetic fields. Technological advances in the ability to manipulate gravitational fields allowed for the creation of directional gravity fields that could directly accelerate neutrons, finally making neutron beam cannons feasible.

The greater mass of the neutron compared to the electron translated to greater firepower. In practice, a neutron beam cannon had 3 to 4 times the power of an equivalently sized electron beam cannon and had greater target penetration capabilities. Once introduced, neutron beam cannons became the primary armament of Alliance battleships. (Data Book: Mechanic & Seiyū Encyclopaedia, p. 180)

By the latter years of the Alliance-Imperial War, c. {{d|787|uc}, neutron beam cannons were the primary (and most common) armament deployed by both the Galactic Empire and Free Planets Alliance. (Legend of Galactic Heroes Volume 1: Dawn)

Electron beam cannons were primarily used as point-defence and anti-air weaponry. Most warships would have an array of small electron beam cannons mounted on turrets that could be recessed into the hull and deployed to shoot down incoming missiles and attacking fighter craft.

The acceleration of protons and electrons using electromagnetic fields has been known since ancient times. Due to the small mass of electrons, they have to be accelerated to a significant percentage of the speed of light in order to be effective as weapons.

The beams were vulnerable to adverse interference by strong magnetic fields such as those of nearby stars. Also since electrons were all negatively charged, they would repel each other, and decrease beam coherence.