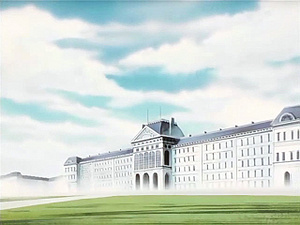 Neue Sanssouci (Japanese: ノイエ・サンスーシ) was the former seat of power of the Goldenbaum Dynasty and the palace of the Kaiser of the Galactic Empire on the planet Odin. The palace, its magnificent gardens, and sprawling luxurious grounds served as the main stage for the Empire's Aristocracy, as well as many government fuctions and ceremonies. Members of the High Nobility used to host or attend garden parties and balls at the palace. The Imperial Court at Neue Sansoucci was also a place of political intrigue, gossip, and competition. It was the center of power of the Galactic Empire.

The North Garden (Japanese: 北苑) was a hunting park stocked with deer and foxes. It was also the site of the Imperial Natural History Research Society building.

The East Garden (Japanese: 東苑) was the centre of government power where audiences and meetings were held. The throne of the Empire was located in the Black Pearl Room (Japanese: 黒真珠の間; German: das Zimmer von Schwarzperle).

The South Garden (Japanese: 南苑) was the location of the private residences of the Imperial family. It also contained a statue of Kaiser Sigismund I.

The West Garden (Japanese: 西苑), also known as the Rear Palace, housed the consorts of the Kaiser. Annerose von Grünewald was a notable former resident of this area.

The palace covered a total area of 66 square kilometres, which included 400 kilometres of corridors, and was bounded on the east by water and on all other sides by adjacent cities and undeveloped land. (LOGH: 'The Abduction of the Young Emperor')

By the end of the 8th century UC, Neue Sanssouci had been in use by the Imperial family for at least five generations.

Beginning in 798 UC (489 IC / 3598 CE), during the reign of Erwin Josef II, Neue Sanssouci saw a significant reduction in its level of operation. Prior to this time, the palace had served an important role in government affairs and was the site of many political and social functions. With the defeat of the high nobles in the Imperial Civil War, and the appointment of Reinhard von Lohengramm to the office of Prime Minister, this relevance was diminished.

Lohengramm oversaw large reductions in palace expenses and ordered the West and North Gardens sealed off. Many of the buildings in the East Garden which once served in the administration of the government were closed off as well — except for a few formal national ceremonies, all governmental duties from this point were performed from the Prime Minister's office. Lastly, with the deaths of the Lippstadt nobles and Kaiser Friedrich IV, much of the South Garden was unneeded as well, and was also closed off.

As a result of these reductions, security in the palace during this time was quite lax. Alfred von Landsberg and Leopold Schumacher, working at the behest of Fezzan and passively encouraged by Lohengramm himself, made use of these deficiencies in their plan to abduct the Kaiser. Landsberg's own ancestors had built a hidden corridor leading from the western end of the North Garden to the foot of the statue of Sigismund I in the South Garden; the knowledge of this corridor had been passed down to Landsberg and its entrance was relatively easily accessible thanks to the lack of security. (LOGH: 'The Abduction of the Young Emperor')

Late on the night of 6 July 798 UC (489 IC / 3598 CE), the Imperial military police were alerted to the existence of a republican arms factory. Unbeknownst to them — but known to Lohengramm — this was a decoy set up by Fezzan. Whilst Ulrich Kesler and his MPs were dispatched to seize the factory, Landsberg and Schumacher sneaked on to the grounds of the palace and abducted the 7-year-old Kaiser. They later set up a government-in-exile on Heinessen. (LOGH: 'The Abduction of the Young Emperor', 'The Arrow Is Released')

In the September following the abduction, Lohengramm installed as Kaiserin the eight-month old Katharin Kätchen. She and her care-takers presumably remained in the palace until the capital's transfer to Fezzan and her forced abdication a year later. (LOGH: 'Operation: Ragnarök')

Neue Sanssouci is named after and inspired by the real-life palace of Sanssouci, located in Potsdam, Germany. The name of the original is derived from the French term 'sans souci', meaning 'without care'.

In Imperial China, reduction in palace expenses was a common symbolic tactic used by reform minded emperors and officials as palace expenses were easily criticized as conspicuous selfish and wasteful extravagance.

After the transfer of the capital to Fezzan, part of Neue Sanssouci was re-opened to the public as an art museum. (DVD Features)

The DVD features give the area of Neue Sanssouci at 66 square kilometers.