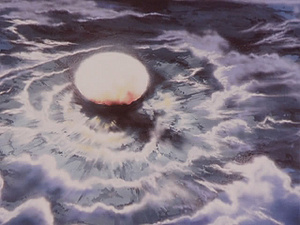 A neutron bomb is type of nuclear weapon designed to release massive amounts of neutron radiation instead of explosive force. Though these weapons do produce large explosions, the radiation they release is able permeate armored vehicles, buildings and bunkers, killing targets who would have otherwise been protected.

In 2706 CE, a nuetron bomb was detonated in the captial city of Rondolina, in the Sirius Republic. Winslow Kennes Townshent was killed in the attack. (LOGH: 'To Earth')