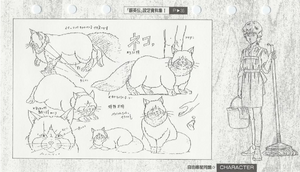 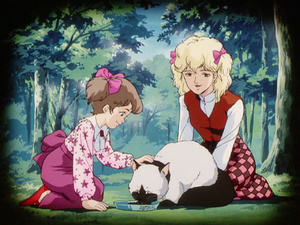 Admiral's bowl in the OVA credits

I would like to find a solid source for kitty's name. Japanese fan sources do say '元帥' (one Google result explicitly says '元帥（ヤン宅のネコ）'), so there's that, but i would like to know where they get it from. Is it mentioned in the anime somewhere, and i've just missed it? Or is it derived from the manga, or what? (I've skimmed through the encyclopaedia but i couldn't find him under ア or カ)

Also, how do we feel about the translation? If it's not mentioned in English anywhere, we're left to come up with our own name. The literal one would be 'Fleet Admiral' or 'Field Marshal', but those sound quite bizarre for a cat's name in English (thus my selection of 'Admiral'). What do you guys reckon?

I was surprised to learn today that kitty's English name is actually written on his bowl in the third-series end credits! It really is Admiral! How about that?  ♥ kine @ 04:06, 21 July 2018 (UTC)