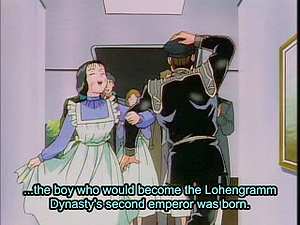 ... the boy who would become the ... second emperor

This discussion has been moved to e-mail. The page will be updated once it is complete.

Kaiser/Kaiserin are the same thing. Therefore he's the 3rd Kaiser, not the 2nd. — Canary

I didn't put that because i was making a distinction between the two — it literally states in the series that he was the second. Since he was born before Reinhard died, Hilde never became the 'acting' emperor. This is consistent with how other patriarchal monarchies function (succession starts with the eldest male child).  ♥ kine @ 16:22, 28 April 2011 (UTC)

Hilde was never 'acting emperor' because she was the Kaiserin. When Reinhard died, she became the leader of the Neue Reich. One of the last things Reinhard says before he dies is that he's confident Hilde will be a better ruler than he could have been. He also tells her to decide whether or not to pass allow Alexander rule the empire.
There's also nothing to indicate Reinhard's empire is a patriarchal monarchy--quite the opposite, in fact.
Hilde rules the empire. She's the one who transforms it into a 'constitutional monarchy'. She holds the title of 'Kaiserin.' Basically, Alexander IS the second Kaiser because Kaiser is a masculine title--but he's only the 3rd ruler. For the purposes of this article, he should be referred to as the 3rd (meaning we should either ignore the weird german gender word or use a different one). — Canary 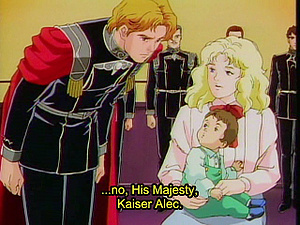 ... pledge your loyalty to Prince Alec... no, His Majesty, Kaiser Alec.

Well we're making a distinction between 'ruler' and 'kaiser' here, but i don't think it's the one you are making. You've mentioned Reinhard's statement before death that she'll be a better ruler than he was — i don't believe this is indicating that she holds the title of kaiser/emperor. He is merely acknowledging the reality that a baby can not govern the entire galaxy — but Alec is his successor, in the same way that Erwin Josef (not his mother or whoever it was that did the actual governing for him) was Friedrich's successor.

The Japanese Wikipedia article seems to confirm this (this is very loosely translated, perhaps you can do it better):

Reinhard ??? (built a regime?) before his death, and the crown went to Prince Alec; however, effective political authority was handed over to Empress Hildegard.

http://gineipaedia.com/wiki/Long_Live_the_Empress!_%28Hoff_Kaiserin%29_%28episode%29
She has the title "Kaiserin." We can consider this a contradiction, but given Reinhard's dialog on his deathbed, it is very clear that Alexander is NOT the Kaiser. The decision as to whether or not he ever will be Kaiser is left to Hildegard. Hilde would not have the authority to make that determination as a regent. Canary 19:50, 28 April 2011 (UTC)

'Kaiserin' is not necessarily an equivalent title to 'kaiser', though (underlines for emphasis):

Empress, the female equivalent, may indicate an emperor's wife (empress consort) or a woman who rules in her own right (empress regnant). [3]

So there is no contradiction there. As far as whether Reinhard gave Hilde a decision regarding Alec's succession, you are describing it more explicitly than how it was stated. Reinhard simply said that she could 'move into constitutional polity' if she wanted. That does not necessarily mean that he was giving her the choice to end the monarchy — Japan and Britain both have a constitutional government, but there are still monarchies. He never specifically mentions anything about Alec's succession at all, except that he would not see a 'reason to sustain the Lohengramm Dynasty' if Alec were not 'the wisest and most powerful in the universe'.

So, again, i can't see how it is anything but a recognition of the reality that she will be governing the Empire until Alec is of age. Even if he had actually mentioned abolishing the monarchy, Reinhard did exactly that when he was a regent, so the question of whether she would 'have the authority' is somewhat ambiguous... :/  ♥ kine @ 22:06, 28 April 2011 (UTC)

I never said anything about her abolishing the monarchy. I, and Reinhard too, are both saying that she was given the power to determine whether or not Alexander would take the throne. She had the power to transfer rulership to anyone, if Alexander was unworthy. This makes Alexander the heir apparent, and makes Hilde the ruler. Regents, after all, by definition, cannot make determinations on succession.

Regarding the dialog... because of the gender of the terms, "2nd Emperor" or "2nd Kaiser" in no way imply that he assumed the throne after Reinhard's passing. Regarding Mittermeyer's line... it's dialog, not narration, and therefore not necessarily meant to be taken as literal truth. Mittermeyer may have been joking, or he may have been making an assumption. Assuming that Alexander would be whats-his-name's Kaiser when whats-his-name comes of age.

Regarding your rather... dictionary dropping... duh. Queen is not necessarily the equal rank of King, either. Not politically. But grammatically? Hell yes it is. Kaiser and Kaiserin are two forms of the same word, like student and studentin, lehrer and lehrerin... the 'in' is a suffix indicating female gender, nothing more. Canary 03:27, 29 April 2011 (UTC)

I, and Reinhard too, are both saying that she was given the power to determine whether or not Alexander would take the throne. When does he say this? He says absolutely nothing of the sort in the CA subtitles — only that she can move into constitutional polity. He mentions nothing about transferring rulership (or not) to anybody.

Regarding Mittermeyer's line... it's dialog, not narration, and therefore not necessarily meant to be taken as literal truth. Mittermeyer may have been joking lol, maybe Reinhard was joking too?

Regarding your rather... dictionary dropping... duh. If it's 'duh', why did you mention it as if the use of that word is proof that she was the second ruler?

These are the facts i can find to support that Alec is second:

These are the facts i can find to support that Alec is third:

I guess nothing got solved. But I do have one question. Reading through the above conversation I saw a few things about the Imperial family after the series ended. Is this information just based off of the information given within the main series or other works outside of it? The reason I ask is while I am fully aware that Alexander was set to be the next Kaiser, I'll avoid choosing a side on what number to assign him, was it explicitly said that Alexander indeed grew of age and was coronated or was it just implied that his path was set and it would all happen in the future? Strayor 07:00, 3 August 2013 (UTC)

Path set, to happen in future. As for the above debate, the problem is I think people are assigning Western connotations to certain roles, such as saying a regent by definition cannot determine the succession. The author is Japanese, and a lot of the dynastic politics and wording is actually based off of historical Chinese Imperial politics, and there are historical precedents of regents in Chinese history that did make such determinations or even took complete power themselves (either being called usurping the throne or their charge yielding the throne to them). Hilde had effective political power as regent and empress dowager while Alec was under age, and this was meant to be yielded once he matured.

Other issues in the series can also be more clearly appreciated if one understands the reference. For example, the ministers' concern over "women's influence" and Oberstein's concern over Hilde's father is a reference to the suspicion in Imperial Chinese politics towards the emperor's consort, and her blood relations. This was because of multiple instances in Chinese history where such relations ended up either attempting to usurp the throne or take over all high government positions especially in the case of an infant emperor and regent dowager empress. The Han and Tang dynasties in particular are two examples where such things happened or where ministers were concerned about such things happening (again). Iracundus 10:49, 3 August 2013 (UTC)

My take on this issue is that Alexander is the 2nd Kaiser since Hilde is merely acting as a regent (with Kaiserin being reflective of her status as the consort of Kaiser Reinhard). This means that as per episode 110, the actual authority of the Goldenlöwe Dynasty is held by Hilde, but officially the 2nd Kaiser would be Alexander. This would also be consistent with Imperial Chinese history which is a major influence in this series as pointed out by Iracundus where empress dowagers would exercise real authority over their (step-)sons, the emperors, but not claiming the position for themselves (except for the famous case of Wu Zetian). Glacierfairy 12:48, 3 August 2013 (UTC)

Also if we look at the final years of the Goldenbaum dynasty, the regent of the last infant Goldenbaum "ruler" signed a notice of abdication on her behalf, yielding the throne to Reinhard. In theory and Imperial law at least, the regent appears to have been a position of real political power, though of course in the Goldenbaum case it was a facade with Reinhard being the de facto ruler already. Iracundus 16:49, 3 August 2013 (UTC)

Not to join the bandwagon but as this is being opened up again I agree with you two as well. Every time I watched the last season I was under the impression that Alexander was going to be the second kaiser in the new empire, with Hilde, as you both have said, acting as regent, having complete authority but in the name of Alexander. Another way of saying it is that Alexander would be listed as the second Kaiser and ruler of the empire, with Hilde being a key leader, but not necessarily a step in the line of succession. I should also mention that Kine's argument above is very well put together and in my opinion erases all but the slightest doubt that Alexander was second in succession rights. Strayor 02:29, 4 August 2013 (UTC)