Appearance in 'The Actress Exits'?

Hey there, here is a thing i've been wrestling with. In episode 075 it mentions that Bruckdorf was involved in the Beenemünde affair, and then it shows a still of him standing in what i assume is the room where she was executed. However, that image does not actually appear in 'The Actress Exits', nor does anything like it.

The guy who brings out the poison looks a lot like Bruckdorf, so i thought maybe that was him... but i'm not sure. The poison guy has lighter/shinier hair that's parted on the opposite side, and he's not wearing the same clothes.

That's got to be him. I think he was just pictured with different hair because someone forgot that they had an image of him already but that looks just like him. That, or he has a brother we are unaware of but since it specifically mentioned him handling this affair I think it's almost certainly Bruckdorf. My question about Bruckdorf is in reference to the position he held whilst serving the Goldenbaums. If he was the Minister of Legal Affairs during their reign then I need to change a few things I have written about Lang being the only key power holder to retain his position in the transition between dynasties. Strayor 15:30, 27 January 2014 (UTC)

Also at 20:24 it looks like it's him, even more so than the poison bearer. Maybe that was his brother haha. 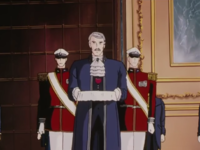 Bruckdorf in 'The Actress Exits'?

Should we assume that the guy in 'The Actress Exits' was probably Bruckdorf, and add it to appearances? Also, the subtitles in the version I watched of 'Rolling Thunder', says that Bruckdorf was a "Grand Court Judge" at the time of the Benemunde affair. Don't how correct the translation is. —Goldenbaum Loyalist 22:09, 14 September 2016 (UTC)