Talk:Military ranks of the Galactic Empire

A good idea for the Goldenbaums, at least, would be to rely solely on pictures of Reinhard. We see him at pretty much every rank, after all.Vympel 14:54, 8 May 2011 (UTC)

I agree, i think ultimately the page should have two tables at the top showing just the insignia for each dynasty, and then next to each rank section we can have a good screenshot of a person of that rank. The FPA one will be that way too (but they'd only have one table for insignia)  ♥ kine @ 15:05, 8 May 2011 (UTC)

I think we could use screenshots of Reinhard's rank insignia from when he held different ranks and use those as an example of the rank insignia in a table. —Goldenbaum Loyalist 15:37, 2 October 2017 (UTC)

This change has implications for the entire site, so we should get a consensus first. To clarify, i guess the proposal is that '元帥' becomes 'grand admiral' for the Empire but remains 'fleet admiral' for the Alliance?

What does everyone think of that? Given the historical context and the German translation used in the OVA, i think it might make sense. But is it too clever? In general i like to be as accurate with names/terms as possible (see Walküre) but i do worry that it could confuse people if we deviate too much from the common terminology in fan circles. Not sure.

If everyone likes it, we'll want to commit to it going forward. Ideally i would also run my bot on all the existing pages but i'm not sure if i have it set up any more.

It does pose a problem for the rank template if the names aren't the same for Imperial and Alliance. Currently, the only thing the second (party) field does is determine which 'Military ranks of...' page gets linked. It doesn't contain any logic to render different names for different parties. We will have to either add that logic or require that people only use 'fleet admiral' for Alliance and 'grand admiral' for Imperial — which isn't ideal, i don't want them to have to remember that. The formatted code also needs updated for that template. Since the current code isn't really correct anyway, i'm going to revert it for now, but we can revisit if everyone approves.  ♥ kine @ 21:43, 4 January 2022 (UTC)

Frankly I am opposed to this change, because Japanese is the source language we are translating from, not German. So '元帥' might very well be rendered as 'Großadmiral' in the Empire, but there is no reason why we should base our translation on the latter instead of the former. This is unlike Walküre, which is clearly intended in the original Japanese to be such. It is not as if Fleet Admiral Steinmetz is addressed as 'グロスアドミラル・シュタインメッツ', to give a crude example. Glacierfairy 09:54, 6 January 2022 (UTC)

You're right that we normally translate directly from Japanese. That's been the policy all along and i don't think we should change it, in large part because most of the German in the series has already been questionably translated from the Japanese once.

In this case, though, i don't think it represents translation from the German. 'Grand admiral' is a term used in English to describe a rank that existed in the historical German navy which is equivalent to 'fleet admiral'. '元帥' is the only term used to refer to the rank in the dialogue of the series, and it can be translated into English either way depending on the context. The only thing 'Großadmiral' does is (potentially) act as that context.

That would be my thinking if we made this change — it wouldn't be a second- or third-hand translation from the German term itself, just a choice of English term based on a cultural/historical reference they intended to make in the original Japanese. But i'm not pushing for it. If you guys don't like it i'm happy with fleet admiral.  ♥ kine @ 23:48, 6 January 2022 (UTC)

I have mixed feelings. For the original 2nd season subs, I did use Grand Admiral for the Empire vs. Fleet Admiral for the Alliance, because it was the equivalent listed at the old logh.net site. I admit it is also a personal preference in that I think Grand Admiral is more fitting for the Empire, especially since they get a cape. However I acknowledge the difficulty that some viewers might have with keeping in mind rank equivalence, and I am also generally not keen to just make changes simply to match it to "the Germanic way". Iracundus 12:05, 6 January 2022 (UTC) 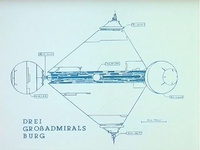 "Grand Admiral" is intention of Dr. Tanaka himself, because he named an imperial fortress "Drei Großadmiralsburg". This is the very original proof that the rank 元帥 for the Empire is "Großadmiral". WalkerEmp 09:29, 7 January 2022 (UTC)

Having thought more about this, I note that for example we have the Imperial Ministry of War as the English title (from Das Kriegsministerium subtitle) as opposed to a direct translation of the Japanese which would be Ministry of Military Affairs. If we go by such a precedent it should be Grand Admiral. Iracundus 09:41, 8 January 2022 (UTC)

lol, you're right actually. I had it exactly backwards above: Policy:Canon#Names says we prefer translating from the German names, not directly from Japanese, and mentions that example specifically. We must have had a discussion about that at some point but i don't remember what my rationale was, whether it was borrowed from the old wiki or what. I don't know. Not sure that WalkerEmp's reasoning above really makes sense, but like i said i could go either way (on both this case and the policy as a whole). Whatever the consensus is. If there isn't one we can default to leaving it alone.  ♥ kine @ 14:06, 8 January 2022 (UTC)