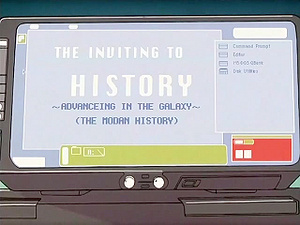 Title screen of The Inviting to History

3D solivision programs were one of the primary forms of entertainment during the Federation's golden age. It is unknown when or if 3D solivision was ever succeeded by alternative forms of media. (Legend of Galactic Heroes Volume 1: Dawn)

Many solivision programs featured highly-romanticized pirates, cast as Robin Hood-esque figures who stole from the wealthy to give the poor, while constantly evading the Federation's military police. These depictions were rarely accurate to the reality of space piracy, but were nonetheless very popular.

The romanticization of the Federation's conflict with Space pirates likely contributed to the fame of military leaders charged with repelling the pirate threats, including Christpher Wood, Michel Cuffren and Rudolf von Goldenbaum.