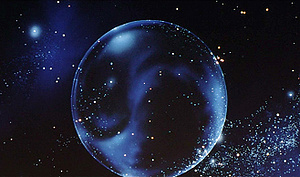 Iserlohn Fortress (Japanese: イゼルローン要塞) was an Imperial fortress located near the Tiamat Starzone. Existing within the eponymously named Iserlohn Corridor, one of only two navigable star routes between the Empire and the Free Planets Alliance (the other being the Fezzan Corridor), Iserlohn kept the territories of the Galactic Empire safe from Alliance invasion.

The fortress had a diameter of 60 kilometres and a mass of nearly 60 trillion tonnes. Its primary weapon was an enormous X-ray beam cannon, the Thor Hammer, which was capable of destroying large numbers of enemy vessels in a single shot. Its docks could berth 20,000 ships, and its dedicated agriculture blocks could sustain both a garrison of up to 2 million and a civilian population of up to 3 million indefinitely. The fortress exterior was a several-layer-thick coating of liquid hydro-metal, which absorbed solid projectiles and reflected directed energy; hundreds of cannon turrets floated in this liquid and would rise to fire at approaching enemies.

When the Galactic Empire discovered the existence of the Free Planets Alliance in 640 UC (331 IC / 3440 CE), they immediately declared the Alliance a rebel government, and dispatched the Imperial fleet to deal with the 'rebels'. At the time, there was only one known navigable route between the Galactic Empire and the Free Planets Alliance — through a narrow band of star systems that would later become known as the Iserlohn Corridor. Naturally seeing the significance of the choke point, and in reaction to being defeated at the Second Battle of Tiamat, the Empire started construction of a massive space fortress in the middle of the Corridor during the reign of Otfried V. It was finally completed a year after his death in 766 UC (457 IC / 3566 CE) during the first year of the reign of his son, Friedrich IV. Based on the Geiersburg Fortress, they named it the Iserlohn Fortress. It would both guard against the possibility of Alliance warships entering Imperial territory and serve as a base of operations for the Empire's own excursions through the Corridor. 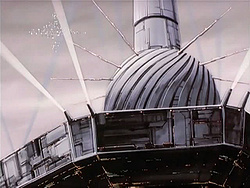 Interior shot of Iserlohn Fortress's dock from the base of the central column
During this era, the Iserlohn Corridor was the only active route between the Alliance and the Empire, as Fezzan's autonomy was respected by both sides. The fortress stationed there was therefore the main obstacle to any Alliance expedition against the Empire, and was put under siege 6 times — these sieges always ending with the defeat and decimation of the Alliance fleet.

During this time, the Empire maintained a split command structure, with a fortress commander in charge of the fortress and a fleet commander in charge of the stationed fleet. The two posts created competition and rivalry between the two commanders and their subordinates, which ironically at times produced beneficial results. This effect and simple inertia led to this command structure being maintained despite suggestions to unify command into a single post.

Among the Alliance admirals that tried and failed to take Iserlohn was Fleet Admiral Sidney Sithole, who led the Fifth Battle of Iserlohn. Sithole showed ingenuity during his campaign against Iserlohn, determining the range of the Thor Hammer and then luring the Iserlohn Fleet outside of its range. He then exercised a continuous pursuit, known as 'parallel pursuit', following the Iserlohn Fleet into firing range but always leaving it between his fleet and the Fortress and leaving little gap between them, so as to neutralise the Thor Hammer. His aim was to force the Imperial Fleet back towards the Fortress, and then either assault or destroy the fortress, believing the fortress's main cannon would not be fired due to fear of inflicting friendly fire casualties. The plan eventually failed, because the Thor Hammer was fired in desperation by the fortress commander despite the Iserlohn Fleet being in the way. Although both Imperial and Alliance fleets took losses from the firing, the Alliance took greater losses and was unable to continue the assault in the face of a fortress willing to fire through its own fleet. (Golden Wings)

Yang Wen-li never considered Iserlohn Fortress the pinnacle of imperial power, but merely an over-reliance on technology. He understood the fortress's limitations from the Fifth Battle of Iserlohn. Sithole had determined the precise ranges of the Thor Hammer, but his fleet lacked sufficient numbers to carry out a decisive victory. When Yang was tasked to capture Iserlohn Fortress, his tactic was the opposite — to infiltrate the fortress with the Rosen Ritter whilst the garrison fleet was chasing a decoy. In the Seventh Battle of Iserlohn, the Alliance's 13th Fleet with merely 6,400 ships, successfully won Iserlohn Fortress for the Alliance. Yang had hoped that Iserlohn Fortress would instead be the Alliance's bargaining chip in deciding a favourable treaty with the Empire, but his wishes never came to fruition as the Alliance High Council later approved a large-scale invasion to the empire using Iserlohn Fortress as a forward base. Nevertheless, after the invasion debacle, he accepted the post of Commander of the Iserlohn Fortress and took on the vital task of protecting the Alliance frontier, a task which he found more comfortable than having to play power politics if he had remained in Heinessen. (LOGH: 'Iserlohn Captured!', 'Invasion of the Imperial Territory')

Yang felt the fortress was expendable, since it did not possess any political or economical importance by itself. When the Galactic Empire used the Fezzan Corridor to invade Alliance territory, Iserlohn lost all strategic value. Yang deceptively 'lost' the fortress to Oskar von Reuenthal so as to free up his fleet to engage with the Imperial fleets that had crossed through the Fezzan Corridor, but later regained it from High Admiral Cornelius Lutz. Yang Wen-li was the only commander to truly conquer Iserlohn Fortress at all, and his ability to capture it multiple times indirectly proved his viewpoint that the fortress was not as important as everyone else assumed it was. (LOGH: 'Fezzan Occupied', 'Admiral Yang's Ark Fleet', 'The Prodigal Sons Come Home')

The fotress had two main docks for its stationed fleet, located at the northern and southern poles, which were essentially immense hollowed out spaces with enclosed docking berths layered out in tiers from a central column that ran through the north-south axis of the fortress. Entry and exit port openings were spaced evenly around each dock. The northern docks appeared to be the more important docking area as the fortress command centre was located at the base of the docks.

The fortress's fighter launch facilities were located in an equatorial trench that ran round the fortress circumference. Fighters launched from extendable tubes that could elevate to project above the liquid metal surface. A pair of point defence turrets were situated above the exit of each launch tube.

Mobile floating gun turrets mounting anti-starship calibre beam cannons formed the secondary weapon systems. These spherical turrets could be submerged within the hydro-metal armour layer when not in use.

Iserlohn Fortress was capable of purifying 2,220,000 cubic metres of water per day for use as propellant. (Fleet File Collection Vol.7)

Sketches of Iserlohn Fortress appear in the extra features of the DVD box set.