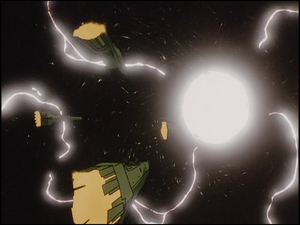 Subspace jump theory is the underlying principle behind warping, facilitating faster-than-light travel across the galaxy through the medium of subspace.

Subspace jump theory was conceived sometime prior to 2391 CE, and helped to usher in the Galactic Federation's golden age of exploration and colonisation alongside the other Three Graces. (Legend of Galactic Heroes Volume 1: Dawn)