(Redirected from Command battleship (FPA))
Jump to: navigation, search
Note: This article may require clean-up to meet Gineipaedia's quality standards. Please help improve it if you can.

Among the largest warships in the Free Planets Alliance' navy, these leviathan battle ships were slow and ungainly, but provided Alliance fleets with much-needed firepower. While Alliance cannons were typically much smaller and less powerful than their Imperial counterparts, Alliance battleships more than made up for that weakness through sheer volume. This also provided Alliance battleships with a redundancy Imperial ships lacked — they could maintain combat readiness in spite of multiple weapon failures. These giant battleships served primarily in command roles, directing the movements of the Alliance's fleets in battle against the Galactic Empire. Several variations of this class of vessel exists, such as the Achilles, Patoroklos, Perun, Cu Chulainn and the Leonidas. Some radically different variations also appear, like the Krishna, Shiva, Airged Lamh and the Mauria. While some of the models, like the Leonidas, appear to be mass produced, it is not certain whether all the other battleships types follow that trend or are one of a kind vessels. 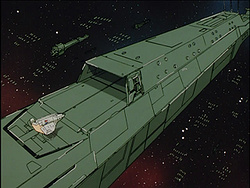 Battleships feature large hangars directly above the main drive on the rear dorsal hull, used primarily for shuttles and other small vessels. If Battleships were capable of carrying any Spartanian attack craft, they must have launched from separate facilities.