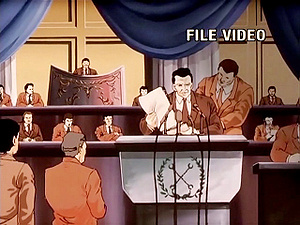 The Galactic Federation (Japanese: 銀河連邦) was a pan-galactic federation that governed over all of the human-colonised planets in the Galaxy. It was founded in 2801 CE (1 UC), and ushered in the Golden Age of Humanity. The year of the Federation's founding became the first year of a new calendar, the Universal Calendar.

The capital of the Galactic Federation was the planet Theoria, located in the Aldebaran Starzone.

The Golden Age of Humanity

After a dark age of constant chaos and bloodshed lasting for nearly three centuries, humanity united itself under a single flag for the second time in its history. In 2801 CE (1 UC) the various former colony worlds joined in common cause on the planet Theoria to found the Galactic Federation. Ruled by a parliament, directed by a president, the Federation was a democratic government dedicated to protecting the rights of its citizens.

The Federation's reunification of the Galaxy incited a new era of deep-space exploration and colonisation. Hundreds of worlds were colonised in this new frontier. Eventually, the new colony worlds became so numerous and so far away from the central Federation government that the rule of law lost power. Space pirates plagued the frontier worlds, killing and stealing with impunity. (LOGH: 'Julian's Journey, Mankind's Journey', 'To Earth')

By 208 UC (3008 CE), the social fabric of the Galactic Federation began to unravel. Scientific discoveries and the expansion of Federation territory ground to a halt; the people lost interest in politics, and the government adopted increasingly conservative ideologies. Crime rates ballooned. Only two centuries into its life, it seemed that the Federation was dying.

In 288 UC (3088 CE), a young soldier named Rudolf von Goldenbaum won a great military victory against the Main Street Pirates, earning him great celebrity in the Federation. In 296 UC (3096 CE) he retired from the Armada and began a political career; immensely popular, he was elected to the Galactic Parliament in a landslide election. Rudolf gathered many fellow young, idealistic parliamentarians about him and formed the National Reform Alliance, a new political party dedicated to 'reinvigorating' the Galactic Federation.

With each election, the National Reform Alliance's power increased. By referendum, Rudolf was appointed prime minister; shortly thereafter, Paliament elected him to the office of president. Holding both the office of President and Prime Minister concurrently, Goldenbaum was the most powerful man in the galaxy.

In 306 UC (3106 CE) Rudolf declared himself 'president for life', and initiated numerous conservative reforms that, amongst other things, disallowed freedom of speech. Then, in 310 UC (1 IC / 3110 CE), Rudolf reorganised the Galactic Federation into the Galactic Empire, declaring himself Emperor and founding the Goldenbaum Dynasty. A new calendar, the Imperial Calendar, was begun to commemorate the Empire's founding.

The final vestiges of the Galactic Federation were wiped clean from the Galaxy in 9 IC (318 UC / 3118 CE) when Kaiser Rudolf 'the Great' permanently dissolved Parliament due to their strong objections to his Inferior Genes Exclusion Act. (LOGH: 'Julian's Journey, Mankind's Journey')

The Galactic Federation, as well at its Universal Calendar, would see new life in 527 UC (218 IC / 3327 CE) with the establishment of the Free Planets Alliance. The Federation was remembered fondly as part of a 'golden era' of humankind, and the story of Rudolf's rise to power served as a constant warning to the people of the Alliance about the dangers of concentrating too much power in the hands of too few people. The early prosperous years of the Alliance would also be likened to the return of the Golden Age of Humanity from the Galactic Federation era.