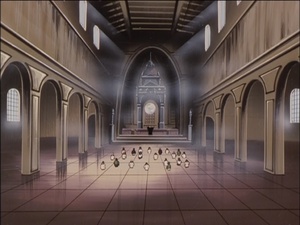 The Terraist Church (Japanese: 地球教教団), more commonly referred to as Terraism (Japanese: 地球教), was an extra-national religious organisation, operated like a cult, which advocated the re-establishment of the planet Terra as the centre of human civilisation. Its symbol consisted of two crossed olive branches framing a symbol for Earth: the sun cross (cross within a circle).

Little is known about the origin of Terraism, although it could be inferred that it was established after the Earth–Sirius War, when Terra gradually became forgotten.

The first known activity of the Terraist Church was the funding of the establishment of the Dominion of Fezzan in 682 UC (373 IC / 3482 CE). By using Leopold Laap, a native of Terra, as a front, the Terraist Church was able to use the spoils of war hoarded by the United Earth Government that was supposedly lost in the aftermath of the Earth–Sirius War to realise the creation of the autonomous dominion and assume secret control over one of the two strategic choke-points of the galaxy. For the next century, the Terraist Church allowed Fezzan to become an indispensable facilitator of trade between the Galactic Empire and the Free Planets Alliance while simultaneously preventing the cessation of hostilities between both the Empire and the Alliance so as to weaken them in preparation for a Terraist takeover. (LOGH: 'New Trends', 'The Long Road Ahead')

Besides its covert operation in Fezzan, the Terraist Church was also active in proselytising its beliefs throughout the galaxy. By the 790s UC, Terraism had gained many adherents in both the Galactic Empire and the Free Planets Alliance. Transporting Terraist pilgrims who were Alliance citizens to Terra, a planet within the Empire, became a viable source of income amongst Fezzani merchants. Terraism at this stage was still tolerated as a religious organization in both the Empire and the Alliance. (LOGH: 'New Trends', 'Before the Storm', DIS: 'Chapter I')

The Kümmel Incident and the invasion of Terra

In October 796 UC (487 IC / 3596 CE), after a resounding Imperial victory at the Battle of Amritsar that was engineered by Reinhard von Lohengramm who was establishing himself and his emerging order within the Empire, the Terraist Church decided to accelerate its plans. This emerging order became all the more apparent with Reinhard's consolidation of power in the aftermath of the Imperial Civil War and the concurrent weakening of the Alliance following the Alliance Civil War. Adrian Rubinsky, the then Landsherr of Fezzan, proposed to assist Reinhard to unify the galaxy as it would be easier to subvert a single, unified autocratic regime and received tacit approval. (LOGH: 'New Trends', 'Farewell, Distant Memories')

Rubinsky's gambit failed when Reinhard occupied Fezzan and used the Fezzan Corridor as the gateway for invading the Free Planets Alliance in December 798 UC (489 IC / 3598 CE) and Rubinsky was forced into hiding. The Terraist Church, distrustful of Rubinsky's ambitions by this stage, decided to initiate its own plot. (LOGH: 'Fezzan Occupied')

The plot involved convincing the terminally-ill Baron Heinrich von Kümmel to assassinate Reinhard via a Seffle particle explosion on 6 July 799 UC (1 NIC / 490 IC / 3599 CE). However, the plot backfired when Reinhard and his subordinates stopped the assassination attempt and instead began suppressing Terraist churches throughout Odin. On 10 July 799 UC (1 NIC / 490 IC / 3599 CE), Reinhard ordered August Samuel Wahlen to suppress Terra, the headquarters of the Terraist Church, by force. (LOGH: 'The Kümmel Incident')

Despite its best efforts to subvert the Imperial invasion, including a failed assassination attempt on Wahlen, the Terraist Church was unable to prevent the Wahlen Fleet from breaching its headquarters and overwhelming its defences. On 28 July 799 UC (1 NIC / 490 IC / 3599 CE), in a last-ditch attempt to halt the Imperial invasion, the Grand Bishop ordered the self-destruction of the Terraist headquarters, which resulted in the deaths of the majority of the high-ranking Terraist clergy alongside many Terraists and some Imperial soldiers that could not escape in time. (LOGH: 'Holy Land')

Archbishop De Villie, the sole-surviving member of the high-ranking Terraist clergy, wrested control of the Terraist Church in the aftermath of the invasion of Terra. He decided to adopt Rubinsky's plan of subverting a unified Empire from within and to facilitate that, he ordered the assassination of Yang Wen-li, the foremost leader of the anti-Imperial resistance. (LOGH: 'Spring Storm')

On 1 June 800 UC (2 NIC / 491 IC / 3600 CE), after the Battle of the Corridor ended in a ceasefire, Yang and the leaders of the El Facil Revolutionary Government boarded the cruiser Leda II to attend the peace talks offered by Reinhard. While en route to the main Imperial fleet, the Leda II was accosted by Andrew Falk, who was previously kidnapped and convinced by the Terraists to assassinate Yang, in an armed merchant ship. Falk's action was however just a ploy to enable Terraists aboard the two Imperial destroyers accompanying Falk to board the Leda II and he ended up being killed by his "escorts". The Terraists succeeded in assassinating Yang and the El Facil leaders in the ensuing fire fight but the boarding party was quickly eliminated by a rescue party from Iserlohn Fortress. The other Terraist Imperial destroyer attempted to flee but it was pursued and destroyed by actual Imperial ships when they refused to surrender. Although none survived, presumably, the Terraists were successful in their mission. (LOGH: 'To the Windy Corridor', 'Spring Storm', 'The Magician Doesn't Come Back')

De Villie's next plan was to instigate Oskar von Reuenthal, the Governor-General of Neue Land and the strongest vassal of Reinhard, into rebelling against Reinhard which he hoped would turn Reinhard into a tyrant that was overly suspicious of his own subordinates and thus giving Terraism an opportunity to flourish in the subsequent reign of terror. (LOGH: 'Rumbling')

An opportunity arose when Reuenthal invited Reinhard to an inspection tour of the planet Heinessen in September 800 UC (2 NIC / 491 IC / 3600 CE). When Reinhard stopped by the planet Uruvasi in October 800 UC (2 NIC / 491 IC / 3600 CE) while en route to Heinessen, he was ambushed by Terraist-affiliated Imperial soldiers and narrowly escaped with his life because of Cornelius Lutz's sacrifice in delaying their pursuers. When news of the regicide attempt reached Reuenthal on Heinessen, he realized he had been set up but decided to revolt anyway out of pride. (LOGH: 'The Urvashi Incident', 'In the Name of Pride')

Reuenthal's revolt however did not have the impact the Terraists had hoped as it was swiftly put down by Reuenthal's best friend and fellow Fleet Admiral Wolfgang Mittermeyer and the Terraist involvement in instigating the events in Uruvasi was uncovered. (LOGH: 'Die by the Sword')

Anti-Imperial demonstrations in Heinessen intensified after the Iserlohn Republic victory in the Eleventh Battle of Iserlohn in February 801 UC (3 NIC / 492 IC / 3601 CE). Paul von Oberstein, who was dispatched to Heinessen to re-assert Imperial authority, rounded up thousands of former high-ranking political and military figures of the former Alliance and detained them in Rugpool Prison so as to use them as negotiation fodder against the Iserlohn Republic Government. The Terraist Church seized the opportunity to subvert the negotiations by instigating a prison riot on 16 April 801 UC (3 NIC / 492 IC / 3601 CE) while simultaneously conducting terrorist bombings throughout Heinessenpolis. While the riot was quickly suppressed and the bombings kept in check, the Church was ultimately successful in delaying the negotiations. (LOGH: 'Cosmic Mosaic', 'Planet of Confusion')

A sense of urgency broke out within the Terraist Church when Reinhard's marriage to Hildegard von Mariendorf was announced in January 801 UC (3 NIC / 492 IC / 3601 CE), and that she was pregnant only added to their impatience as an heir to the Goldenlöwe Dynasty would complicate the Church's plans. To remedy this, a plot was hatched to assassinate the new Kaiserin. (LOGH: 'Long Live the Empress! (Hoff Kaiserin)')

On 14 May 801 UC (3 NIC / 492 IC / 3601 CE), Terraists attacked multiple key infrastructure sites throughout Fezzan to disperse the strength of the Imperial capital garrison. In the evening of the same day, they succeeded in infiltrating Holly House, the provisional Imperial residence, and proceeded to set it on fire in an attempt to kill the Kaiserin and the Kaiser's visiting sister Annerose von Grünewald. The plot failed however when Ulrich Kesler, the commander in charge of the Imperial capital defense as well as the military police, saw through the Terraist plot and personally rescued both Hildegard and Annerose from the burning building. Kesler proceeded to wipe out Terraist presence on Fezzan. (LOGH: 'The Burning of Holly House')

The Terraist Church's failure in Fezzan proved to be a major setback and it was reduced to only a single cell based in Heinessen. In July 801 UC (3 NIC / 492 IC / 3601 CE), the Church made a final assassination attempt on the dying Reinhard in Fezzan. The operation, personally led by De Villie, resulted in the bombing of what the Church believed to be Reinhard's residence but killed Oberstein instead. The Terraists were spotted by visiting representatives of the Iserlohn Republic Government while gloating over their supposed victory and the latter proceeded to attack the former. De Villie himself was personally slain by Julian Mintz in part for his crimes against humanity but more for the fact that he had ordered the assassination of Mintz's guardian and mentor Yang Wen-li. From then on, the Terraist Church as an organisation ceased to exist. (LOGH: 'Dream: To See It to the End')

The Terraist Church was a secret society which advocated the re-establishment of the planet Terra as the centre of human civilization. Whilst their capital and holiest temple was on Terra beneath the rubble of Mt Kanchenjunga, they had many churches around the galaxy — from the Free Planets Alliance's capital, Heinessen, to the former capital of the Galactic Empire, Odin. They additionally had a strong presence in the new Imperial capital of Fezzan, having held great influence over the former Fezzani government before its overthrow and re-annexation by the Empire.

Though ostensibly united in their goal of re-establishing Terra as the centre of human civilisation, the Terraism movement had internal divisions. The Grand Bishop was the official head of the movement and was a genuine believer. Archbishop De Villie was only interested in seizing power and using the movement as a means to achieve this. He did not believe in Terraism's religious ideals. Adrian Rubinsky, though originally an agent funded and supported by Terraism, privately despised the religious movement and used Terraism's support as a means of achieving his own ends.

Terraism was a powerful movement with followers all across the Galaxy. On the surface, they were mostly benign, chiefly concerned with missionary activities. Secretly, however, the Church routinely used drugs, brainwashing, and most notably acts of terrorism to accomplish their goals: The Terraists were behind many assassination attempts, successful and unsuccessful, on both powerful heads of states and high-ranking military officers, including Yang Wen-li, Reinhard von Lohengramm, and August Samuel Wahlen. Their covert sponsorship and funding of the establishment of the Dominion of Fezzan was aimed originally at establishing a third power to keep the war going between the Galactic Empire and the Free Planets Alliance until the mutual exhaustion and collapse of both, allowing the Church to establish a new theocratic state uniting humanity once again under the rule of Terra.

The Church also routinely used brainwashing drugs to maintain control over their 'followers', enabling them to convert even mild believers into suicidally devoted fanatics.

Terraism, ironically, in attempting to return the centre of human civilisation to Terra ended up achieving the exact opposite, with the creation of a new single government based on Fezzan. The new strategy of overturning the balance of power proved to be fatally flawed as the New Galactic Empire proved more resilient to takeover than expected.

Terraism is the only known organised religion in Legend of Galactic Heroes. However, characters in the series, especially those from the Empire, have been shown occasionally to invoke the names of gods, such as the common by the great god Odin, and the concept of Valhalla.