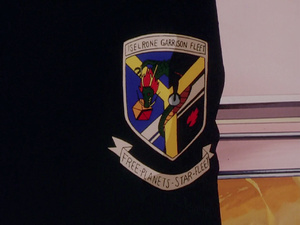 The Yang Fleet (Japanese: ヤン艦隊) was a Free Planets Alliance star fleet which evolved from and succeeded the 13th Fleet. It was commanded by Yang Wen-li.

The Yang Fleet was in fact a term of convenience used in both the Free Planets Alliance and the Galactic Empire to describe any star fleets commanded by Yang Wen-li. Throughout its existence, it had gone through several official designations, the first of which being the Iserlohn Garrison Fleet (Japanese: イゼルローン駐留艦隊), established in 796 UC (487 IC / 3596 CE) after the Battle of Amritsar. Its flagship was the Hyperion and was stationed in Iserlohn Fortress. (LOGH: 'New Trends')

Under the Free Planets Alliance

The Iserlohn Garrison Fleet first saw action in April 797 UC (488 IC / 3597 CE) during the Alliance Civil War where it was tasked by the Joint Operations Headquarters Chief Admiral Dawson to suppress a series of military rebellions that had broken out in various Alliance planets. It then engaged with and defeated the 11th Fleet, then aligned to the National Salvation Military Council, which stripped the rebels' mobile combat capacity. It ultimately played a crucial role in ending the civil war by its successful liberation of the Alliance capital planet Heinessen. (LOGH: 'The Yang Fleet Goes Out', 'The Battle of Doria Starzone, And...', 'Victory for Whose Sake?')

In April 798 UC (489 IC / 3598 CE), it engaged with an Imperial invasion force commanded by Admirals Karl Gustav Kempff and Neidhart Müller during the Eighth Battle of Iserlohn. The sheer power of the mobile Geiersburg Fortress, which spearheaded the Imperial invasion force, coupled with the temporary absence of Yang Wen-li, forced the Iserlohn Garrison Fleet on the defensive for almost the entire duration of the battle. When Yang returned to Iserlohn Fortress with a reinforcement fleet, the Iserlohn Garrison Fleet played a role in destroying Geiersburg Fortress and ending the Eighth Battle of Iserlohn. At this time, the Yang Fleet comprising both the Iserlohn Garrison Fleet and the reinforcement fleet totaled 15,000 ships. This was reduced back to 10,000 following the loss of insubordinate forces pursuing the retreating Imperial invasion force, only to fall victim to fresh Imperial reinforcements.(LOGH: 'Fortress vs Fortress', 'The Return', 'Determination and Ambition')

In November 798 UC (489 IC / 3598 CE), during the Ninth Battle of Iserlohn, the Iserlohn Garrison Fleet was responsible for engaging with the Imperial fleets led by Oskar von Reuenthal, Helmut Lennenkampf and Cornelius Lutz to allow the evacuation of Iserlohn Fortress to proceed smoothly. After settling the evacuated civilians to a safe place, it then travelled to Rantemario Starzone where it participated in the final stage of the Battle of Rantemario and acted as a rearguard for the defeated Alliance force led by Admiral Alexandre Bewcock before retreating with it back to Heinessen. (LOGH: 'The Sounding of Gjallarhorn', 'Admiral Yang's Ark Fleet', 'The Two-Headed Snake: The Battle of Rantemario')

In February 799 UC (1 NIC / 490 IC / 3599 CE), the Iserlohn Garrison Fleet combined with the surviving Alliance forces from the Battle of Rantemario to engage with the Imperial expeditionary force led by Reinhard von Lohengramm. Under the overall command of Yang, the combined fleet assaulted the Imperial forces with guerilla tactics for around a month, forcing Reinhard to set himself as a bait to lure Yang out into an open engagement in the Vermilion Starzone. The subsequent Battle of Vermilion between April and May 799 UC (1 NIC / 490 IC / 3599 CE) ended with the combined fleet defeating Reinhard's fleet. However, his subordinates Wolfgang Mittermeyer and Oskar von Reuenthal managed to lead their fleets to besiege Heinessen and force the Alliance government into an unconditional surrender just before Reinhard's flagship Brünhild was destroyed. Yang complied with his government's orders to lay down arms but not before secretly allowing a small force led by Willibald Joachim von Merkatz to escape. From then onwards, the Iserlohn Garrison Fleet was practically dissolved. (LOGH: 'The Darkness Before Dawn', 'Battle After Battle', 'The Battle of Vermilion (Part One)', 'The Battle of Vermilion (Part Two)', 'Sudden Change')

Under the El Facil Revolutionary Government

In late July 799 UC (1 NIC / 490 IC / 3599 CE), Yang Wen-li was forced to depart from Heinessen after the Alliance government tried to pre-empt Imperial intervention and execute him. He and his subordinates head towards the Dayan Khan supply base to join up with Willibald Joachim von Merkatz's small force, which had since then expanded to over 1000 ships after a successful raid on a scheduled decommissioning of Alliance warships as required under the Alliance peace treaty with the Empire. Yang took over command of that fleet, naming it the Yang Irregulars (Japanese: ヤン・イレギュラーズ) and taking the battleship Ulysses as his new flagship. However, when Yang and his subordinates joined the El Facil Revolutionary Government in December 799 UC (1 NIC / 490 IC / 3599 CE), the fleet was officially designated as the El Facil Revolutionary Reserve Force (Japanese: エル・ファシル革命予備軍). (LOGH: 'Holiday's End', 'To El Facil')

Between January and April 800 UC (2 NIC / 491 IC / 3600 CE), the El Facil Revolutionary Reserve Force was reinforced by the remnants of the Free Planets Star Fleet and reached a peak strength of around 20,000 warships. (LOGH: 'The Edict of the Winter Rose Garden', 'The Battle of the Corridor: The Invincible and the Undefeated')

The first Yang Fleet was formed by the absorption of the 10th Fleet into the 13th Fleet, which had its genesis in Yang Wen-li commanding the remnants of the 10th Fleet at the Battle of Amritsar. (Legend of Galactic Heroes Volume 1: Dawn)