Lassalle Lobos (Japanese: ラザール・ロボス) was an Alliance fleet admiral who served in the Free Planets Star Fleet as Chief Commander of the Space Fleet.

Lobos notably participated in the Sixth Battle of Iserlohn and Fourth Battle of Tiamat, and was placed in command of the Alliance invasion of Imperial space in 796 UC (487 IC / 3596 CE). After the invasion ended in a catastrophic defeat for the Alliance, Lobos most likely was held accountable for the loss and forced to step down, as his position as Space Fleet Commander was taken up by Admiral Alexandre Bewcock. (My Conquest Is the Sea of Stars; LOGH: 'Liberation of the Frontier Zone', 'The Battle of Amritsar Starzone')

He respected and largely relied on the strategic plans of Andrew Falk, both at the Sixth Battle of Iserlohn and the invasion of the Empire. (HBSHBL: 'Truth Is the Daughter of Time', LOGH: 'Liberation of the Frontier Zone') 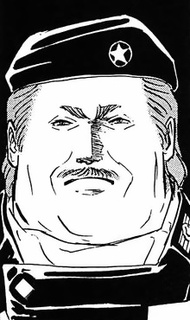 Lobos's position was subordinate only to Fleet Admiral Sidney Sithole. Following the Alliance's aborted invasion of the Empire, Sithole predicted that Lobos would succeed him. However, he (Lobos) does not appear in the series following the Battle of Amritsar Starzone. Notably, he is absent from the group of Alliance officials arrested by Oberstein in 'Cosmic Mosaic', and is not mentioned as having been present at Rugpool Prison in 'Planet of Confusion'.

Lobos's mother had fled to the Alliance from the Empire. (Legend of the Galactic Heroes Gaiden: 'Enemy, Friend, Enemy, Enemy, Enemy...')

Lobos was apparently a skilled and competent officer when he was younger. For unknown reasons this changed when he was in his forties. His subordinates speculated as to why, with reasons ranging from physical health reasons to psychological reasons. (Legend of Galactic Heroes Volume 1: Dawn)

Fleet Admiral Lobos appears in volume 4 of the manga. His appearance, demeanour, and role in the story are roughly similar to his anime depiction.