Otho von Braunschweig (Japanese: オットー・フォン・ブラウンシュヴァイク) was an Imperial Duke and the husband of Kaiser Friedrich IV's daughter Princess Amarie, being among the most influential high nobles at court during the waning years of the Goldenbaum Dynasty. A major opponent of the upstart Reinhard von Lohengramm, he stood for preserving the old order during the Imperial Civil War. Although he possessed much wealth and military might, Duke Braunschweig proved to be incompetent and came to be viewed as the personification of the decadence and decline of the Imperial nobility.

He was forced to commit suicide by his chief retainer shortly after the confederated aristocrat forces were defeated by Lohengramm.

Otho von Braunschweig was born into one of the most powerful aristocratic houses in the Galactic Empire and became active in politics during the late Goldenbaum Dynasty. He eventually married into the imperial family in the form of Princess Amarie, one of the two daughters of Emperor Friedrich IV. Their daughter, Elisabeth, was one of the potential claimants to the throne as Friedrich's granddaughter, although it was a family secret that she inherited a genetic disease which would prevent her from being able to ascend to the crown as per the Inferior Genes Exclusion Act. (LOGH: 'New Trends', RET: 'Chapter IV', HBSHBL: 'The Night of the Party')

At court he became one of the staunchest defenders of the Goldenbaum Dynasty and the power of the highborn aristocracy, although he found some of Kaiser Friedrich's actions disagreeable. As Reinhard von Lohengramm rose through the ranks Imperial navy during that time, Braunschweig opposed his meteoric advancement, as well as the the Kaiser's decision to grant him a peerage title. The Duke became a leading member of the anti-Reinhard faction at court. He played a key role in organizing the circumstances that would result in the Battle of Astarte, including the leak of information on coming operation via Fezzan to the Free Planets Alliance, and was outraged when Reinhard was nonetheless victorious. (LOGH: 'The Klopstock Incident', HBSHBL: 'Candidate for Succeeding a Count's Family', Overture to a New War) 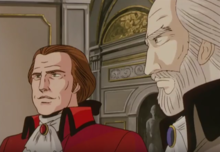 In 796 UC (487 IC / 3596 CE), Otho von Braunschweig held a birthday party for his daughter Elizabeth. Elizabeth's father, Kaiser Friedrich IV, was expected to attend the party. The disgraced Imperial Marquis Klopstock presented Duke Braunschweig with a magnificent portrait of Rudolf von Goldenbaum, and in return Duke Braunschweig allowed Klopstock to attend the party, ostensibly so that the Marquis could entreat Kaiser Friedrich IV to allow his grandchildren back into the Imperial Court. Presumably, Duke Braunschweig would gain the obligation of the marquis for any future favours. Despite his dislike of Reinhard von Lohengramm, the duke also invited the young fleet admiral to the party. (LOGH: 'The Klopstock Incident')

Thirty years prior, Klopstock had supported Prince Clementz von Goldenbaum in the struggle for the crown, rather than Friedrich IV. In retaliation, Marquis Klopstock and his entire family were banished from the Imperial Court. It was not the kaiser who banished Klopstock, but the kaiser's retainers who used the kaiser's name to banish Klopstock. As one of Friedrich IV's chief supporters and as his son-in-law, Duke Braunschweig was the single most powerful and influential noble in the Empire, rivaled only by Marquis Wilhelm von Littenheim. Klopstock intended to get revenge on them all. (LOGH: 'The Klopstock Incident')

The night of the party, Marquis Klopstock prepared an explosive device disguised as a cane, and timed it to explode at 7:00 pm, shortly after Kaiser Friedrich IV's expected arrival. The plot ended up failing as someone removed the cane from the main ballroom, saving the lives of Braunschweig, Lohengramm, and everyone else present. Incidentally, the emperor had come down with a stomach ache and did not even arrive at the party, returning to Neue Sansouci. Klopstock committed suicide upon learning about this later that night. (LOGH: 'The Klopstock Incident')

After the death of Emperor Friedrich in late 796 UC (487 IC / 3596 CE), a succession crisis broke out over who would succeed him. Braunschweig and his main rival in the nobility, Marquis Wilhelm von Littenheim, had been maneuvering to get their daughters onto the throne and were outraged when the acting Imperial prime minister, Klaus von Lichtenlade, ignored them both. As the ultimate civil authority in the Empire and the holder of the Imperial Seal, he gave the crown to the son of the deceased Crown Prince Ludwig, the five-year old Erwin Josef II. Lichtenlade did not want to relinquish his power to the other high nobles. This move got both Braunschweig and the other nobles outraged, who were distrustful of Lichtenlade and his newfound ally Reinhard von Lohengramm. (LOGH: 'New Trends', 'The Lippstadt Conspiracy')

It soon became clear that the situation was descending towards a military confrontation between the two power blocs: the Lohengramm–Lichtenlade axis and the Braunschweig–Littenheim alliance. Lohengramm, who was named supreme commander of the space armada, wanted to provoke an outburst before the nobles could take the time to unify. The opportunity came on the night of 6 April 797 UC (488 IC / 3597 CE) when one of Braunschweig's subordinates, Captain Anton Fellner, tried to assassinate Lohengramm on his accord by attacking his mansion, only to be fought off. Braunschweig and his supporters in the aristocracy had no choice but to flee Odin as Lohengramm's troops began seizing the important facilities and arresting nobles. (LOGH: 'The Lippstadt Conspiracy')

Some of the noblemen were arrested but the majority, including both Duke Braunschweig and Marquis Littenheim, the ringleaders of the anti-emperor faction, managed to escape. Together, they fled to Geiersburg Fortress and marshalled their forces, determined to settle things with Lohengramm on the field of battle. (LOGH: 'The Lippstadt Conspiracy') 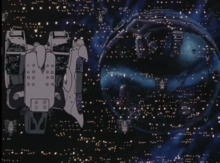 Duke Braunschweig—who gave himself the rank of fleet admiral—had initially planned to station forces at nine bases between Odin and Geiersburg Fortress, thinking the Lohengramm forces would exhaust themselves assaulting each base in series and stretch their supply lines. High Admiral Willibald Joachim von Merkatz, the military commander of the Lippstadt forces, opposed this dispersion of forces arguing the bases could be isolated and cut off. He instead proposed that the Lippstadt forces wholly retreat to Geiersburg to consolidate power in an impenetrable fortress. Admiral Staden tried to one-up Merkatz with adding an additional plan of sending a sortie against Odin to capture and then "protect" the infant Kaiser. However when chosen to implement this plan, Staden was defeated. Staden retreated to Rentenberg Fortress where Ovlesser commanded a force of Imperial armoured infantry. (LOGH: 'Bloodshed in Space')

Despite some initial setbacks at the hands of Ovlesser, the fortress eventually fell to Reinhard's forces and Ovlesser was captured. He was released to return to Geiersburg Fortress, but as he was the sole prisoner released, Duke Braunschweig suspected (falsely) that Ovlesser was a traitor and had him killed, sowing the seeds of internal suspicion and doubt within the rest of the Lippstadt League. (LOGH: 'Bloodshed in Space')

The Lippstadt League's sole military success, the Battle of Schann-tau, came during the brief period Merkatz was allowed free rein to fight as he chose, resulting in Merkatz forcing Admiral Oskar von Reuenthal into withdrawing from the Schann-tau system. However Merkatz's authority was undermined by the division of Lippstadt forces without his notification. Braunschweig had allowed Marquis Wilhelm von Littenheim to take a third of the Lippstadt forces ostensibly to regain control over rebellious frontier fiefs. The political rivalry between Braunschweig and Littenheim was longstanding and the ulterior motive of this was to get Littenheim away from Geiersberg Fortress. Littenheim would ultimately be defeated and Geiersburg Fortress itself would come under siege by Lohengramm forces. The final straw for Merkatz was when Braunschweig declined to punish insubordinate nobles that had sortied from the fortress without permission. Despite his loss of control as the Lippstadt military commander, Merkatz still rescued Braunschweig when the duke personally led an ill-advised offensive against the besieging Lohengramm forces that resulted in the Lippstadt League losing yet more of its ships. (LOGH: 'Courage and Loyalty')

The Westerland Massacre was a critical turning point in the Imperial Civil War. The planet Westerland was part of the territory held by Duke Braunschweig. In the aftermath of military setbacks, the Lippstadt League began heavier resource extraction from the territories under its control in order to prepare for an anticipated siege of their main base, Geiersburg Fortress. On Westerland, this resulted in the commoners rising up in revolt and Duke Braunschweig's nephew Baron Scheidt was killed in the ensuing struggle. Enraged by the death of his relative at the hands of commoners, Duke Braunschweig decided to make an example of the entire planet by launching nuclear missiles at it. The use of nuclear weapons on inhabited worlds had been a taboo since the Thirteen Day War. He overruled his aide, Commodore Ansbach, who had advocated a more selective policy of punishing only the ringleaders of the rebellion. (LOGH: 'The Fall of Goldenbaum')

When Duke Braunschweig launched a final desperate attack against the besieging Lohengramm forces, Merkatz participated despite knowing the attack was a poor tactical decision. The Lippstadt forces were dramatically weakened from poor morale and numerous desertions in the aftermath of the Westerland Massacre. When the Lohengramm forces counterattacked, a swift collapse of the Lippstadt line ensued and Geiersburg Fortress fell due to internal insurrection. Upon returning to Geiersburg, Braunschweig was greeted by Ansbach, who was released from his cell by his subordinates. He recommended that his lord committed suicide honorably, but the duke tried to avoid it so Ansbach's men held him down and forced Braunschweig to drink poisoned wine, killing him. (LOGH: 'The Fall of Goldenbaum')

Duke Braunschweig epitomized the final decadence and incompetence of the nobility of the Galactic Empire, under the rule of the Goldenbaum dynasty. Having inherited vast wealth and territory from birth, he took for granted his power and station. He valued bloodline and pedigree and scorned those of lower birth than him. He was biased towards the nobility, even when they had transgressed military law. Arrogant, he refused to listen to advisors and insisted on meddling in military affairs despite his own lack of ability. He viewed the people under his rule as his own personal property, to be treated and if need be killed in any fashion he wanted, and took the loyalty of his retainers for granted. (LOGH: 'The Lippstadt Conspiracy', 'Courage and Loyalty', 'The Fall of Goldenbaum')

His actions in causing the Westerland Massacre forever lost the high nobles and the Goldenbaum dynasty any support they might have had from the rest of the population. (LOGH: 'The Fall of Goldenbaum')

It was a suppressed fact that his daughter Elizabeth von Braunschweig, as well as the daughter of his ally/rival Marquis Littenheim, Sabine von Littenheim, had inherited a genetic disease via their mothers (Amarie and Christine), who were sisters. Under the Inferior Genes Exclusion Act, this would have made Sabine and Elizabeth ineligible for the throne, and would have disgraced both Duke Braunschweig and Marquis Littenheim. (RET: 'Chapter IV')