(Redirected from Die Neue These)
Jump to: navigation, search 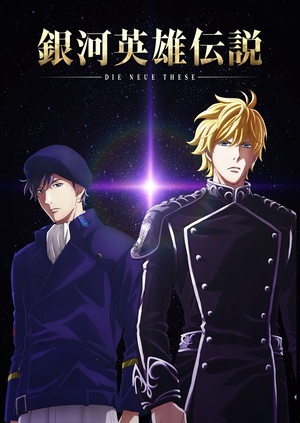 In addition to this animated adaptation, Legend of Galactic Heroes has also been adapted into the original 110-episode OVA series, three OVA films, a prequel Gaiden OVA series, and a musical stage production.

For over 150 years in the distant future two interstellar human states – the Galactic Empire and the Free Planets Alliance – were embroiled in what seem to be a never-ending war within the Milky Way galaxy. Out from the ravages of war emerged two young stars whose deeds would make them worthy of the appellation of Galactic Heroes. They are Reinhard von Lohengramm from the Galactic Empire and Yang Wen-li from the Free Planets Alliance.

The first season, Encounter (Japanese: 邂逅, Kaikō), is a 12-episode series that covers volume 1 of the original novels.

The second season, Stellar War (Japanese: 星乱, Seiran), is comprised of 3 animated films, equivalent to a 12-episode series. It covers the end of volume 1 of the original novels, as well as volume 2.